Since 1973 the headquarters of the World Union for Progressive Judaism has been located in Jerusalem – a testament to our unwavering commitment to the land, the people and the State of Israel. Mercaz Shimshon, the World Union’s new cultural and educational center, alongside the Beit Shmuel educational facility symbolizes Progressive Judaism’s impact on Israel and world Jewry. 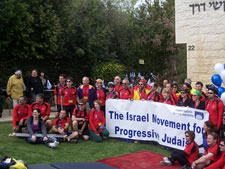 The development and support of Progressive Jews, through the Israel Movement for Progressive Judaism (IMPJ), represents one of the World Union’s most important goals. We believe that the State of Israel must reflect the rich diversity of contemporary Jewish life and that Progressive Judaism can and must play a vital role in shaping the religious character of the Jewish state.

Accomplishments over the past decades have been impressive indeed. In addition to a growing network of congregations, community centers, kindergartens and kibbutzim, the IMPJ has established numerous educational projects that impact upon thousands of Israeli schoolchildren and families each year. The IMPJ has also developed a wide range of programs designed specifically for immigrants from the former Soviet Union, particularly leadership training courses, to raise a generation of Russian speaking community leaders, teachers and rabbis.

Hundreds of thousands of Israelis indicate in population surveys that they most identify with the approach of Progressive Judaism. With the help and support of Progressive Jews worldwide, we are committed to changing the status quo relationship between religion and politics in Israel in order to ensure that, one day, all religious streams will be entitled to full government recognition and support.

Leading this struggle for full and equal rights is the Israel Religious Action Center (IRAC), the political advocacy arm of Progressive Judaism in Israel. IRAC also provides free legal counseling and representation for immigrants (many from the former Soviet Union) in order to help protect their rights and advance their integration into Israeli society.

Please fill out this form to share "Israel" via e-mail.