About the World Union for Progressive Judaism

The World Union, established in London in 1926, is the international network of the Reform, Liberal, Progressive and Reconstructionist movements, serving an estimated 1.8 million members worldwide in more than 1,250 congregations in over 50 countries.

Under the dynamic leadership of Lily Montagu, its honorary secretary, and Claude Montefiore, its first president, the World Union for Progressive Judaism was established in London in 1926. The World Union set out to establish a movement presence wherever there were Jewish communities wishing to renew or establish their commitment to a contemporary expression of the Jewish religion and its traditions. 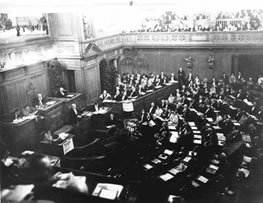 The very first international convention of the World Union for Progressive Judaism took place in 1928 when leaders of the newly formed organization gathered in Berlin – the birthplace of Reform Judaism. The goal was to unite into a permanent union the various progressive Jewish movements already in existence in countries around the world.

The Reform movement quickly took a firm hold in North America, becoming the largest and most dynamic Jewish movement on that continent and a stalwart constituent of the World Union. A year after Rabbi Solomon Freehoff became president of the World Union in 1959, the administrative offices of the organization moved from London to New York.

In 1973, with the growing commitment to building a Progressive movement in Israel, the organization moved its international headquarters to Jerusalem under the leadership of its then Executive Director, Rabbi Richard Hirsch. In 1976 the World Union became the first international Jewish religious organization to affiliate with the World Zionist Organization and the Jewish Agency for Israel.

The Israel Movement for Reform and Progressive Judaism was established in 1958. As of 2015, the movement includes 60 congregations, numerous community centers, kibbutzim, kindergartens and schools, a youth movement and The Israel Religious Action Center (IRAC) that advocates for social justice and equal rights for all Israeli citizens – Jews and non-Jews alike. The Israel Movement for Reform and Progressive Judaism, a World Union affiliate, has established a permanent presence in the State of Israel and provides a modern religious option for a rapidly growing number of Jews.

Concurrently, around the world, the liberal streams of Judaism – known variously as Reform, Progressive, Liberal, and Reconstructionist – have enjoyed a rebirth that is particularly profound in places where they had been all but extinguished.

Some of the most dramatic examples have been taking place in several countries of the former Soviet Union (FSU) since the fall of Communism. The World Union’s expanding FSU department has helped establish both regional and national movements that comprise over 40 Progressive congregations in Russia, Ukraine, Belarus and the Baltic States, a growing number of indigenous rabbis and a dynamic Netzer Olami Zionist youth movement, as well as paraprofessional training, adult programming, and youth camps.

The Abraham Geiger College was founded in 1999 in Berlin and already by 2006 had ordained its first rabbinical students. This historic achievement was the first rabbinic ordination in Germany since the Shoah, symbolizing the remarkable renewal of Reform Judaism in the land of its birth. It was hailed by political and religious leaders throughout the world as a testimony to the fact that Reform Judaism had come full circle from its inception in Germany to playing a vital role in the future of Jewish life in Europe. From the UK to the Czech Republic, from Poland to Italy, individuals and communities are increasingly enthusiastic about rediscovering and expressing their Jewish identity.

Under the auspices of the World Union and its various constituent movements, Progressive Judaism is also thriving in Australia, New Zealand, Asia and South Africa, as well as in countries throughout Latin America and the Caribbean. The World Union’s international connections and support have been essential for many of these Jewish communities, which would otherwise remain isolated and unfulfilled.

Looking ahead, the World Union aspires to continue developing the tools and resources that allow individuals and communities everywhere to share in each other’s successes, learn from each other’s challenges and experience the strength and unity of Klal Yisrael.

Please fill out this form to share "History" via e-mail.