The European union of the World Union, based in London, focuses particularly on the challenges of continental Europe where the increasing Jewish population now provides enormous potential for growth. Communities destroyed during the Nazi period are re-emerging and rebuilding themselves from both survivors who returned after the Second World War and immigrants from the Former Soviet Union, many of whom are settling in Germany where there are now 18 congregations and many education programs. Two rabbinical seminaries, in Germany and the Netherlands, are complementing the work of the Leo Baeck College-Centre for Jewish Education in the U.K in training rabbis for Europe. 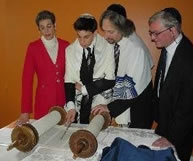 Outside the United Kingdom, there are substantial congregations in Austria, Belgium, France, Germany, the Netherlands, and Switzerland, as well as smaller ones in the Czech Republic, Denmark, Hungary, Italy, Luxembourg, Poland, Spain and Sweden.

A well-organized European Region Beit Din provides a coherent structure for emerging communities and offers a modus vivendi for individuals and for new groups living under difficult circumstances particularly in former Communist countries.

Be inspired by our conference held in Dresden, Germany, in 2014 by viewing this video. Enjoy a taste of the many lectures, diverse workshops, and exceptional programs that highlight the invisible thread that unites us all – be it in Europe or anywhere around the world.

Please fill out this form to share "Europe" via e-mail.