An estimated 1.8 million members worldwide – both large and small, some established and others just starting – currently affiliate with Reform, Progressive, Liberal or Reconstructionist Judaism. From the former Soviet Union, Germany and Israel to Australia, Latin America and beyond, Jews are experiencing an awakening, or a rebirth, of congregational activity on new and unparalleled levels.

The World Union is proud to be playing a major role in the historic renewal of Jewish life for millions of Jews living in the former Soviet Union (FSU). After over 70 years of Communism, religious oppression and persecution, Jewish communities in the FSU have once again become vibrant with the World Union’s assistance. 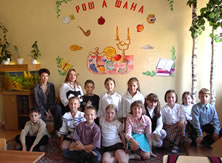 The first congregation to officially join the Reform movement was Hineini in Moscow in 1990. Today, over 35 congregations in Russia, Ukraine, Belarus and the Baltic states, spanning 11 time zones from the Polish border to the Pacific Ocean, have officially become part of the World Union family, which now has local branches in Moscow, St. Petersburg, Kiev and Minsk. There are currently five native-born rabbis and a full-time academic program, the Institute for Modern Jewish Studies in Moscow that trains Jewish educators and rabbis for meeting the growing needs of Russian-speaking Reform congregations in the region.

The Progressive movement across Russia, Belarus and Ukraine operates nursery schools and Sunday schools under the leadership of a team of full-time education directors. Netzer Olami, the international Zionist youth movement of the World Union, has become the largest Jewish youth movement in the FSU, leading summer and winter camps for more than 1,000 participants, as well as youth clubs and counselor training programs during the year.

The World Union actively promotes ties between congregations in the FSU and their counterparts around the world through twinning programs and Torah donations, and by coordinating with HUC-JIR to send rabbinical students to provide spiritual leadership during Jewish holidays.

Please fill out this form to share "Former Soviet Union" via e-mail.