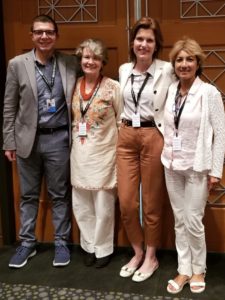 During the final days of August, 8,000 individuals representing thousands of NGOs converged for the 68th United Nations Civil Society Conference in Salt Lake City, UT. The goal of the conference was to rally Civil Society around UN Sustainable Development Goal #11 “Building Inclusive and Sustainable Cities and Communities.”

The session was in part a response to the growing influence of orthodox and conservative faith-based organizations in the UN system, a side effect of many UN member states embracing more fundamentalist sects of religion. The purpose of the workshop was three-fold:

First, to educate a broad audience on progressive streams in major world religions and upend public perception of fanaticism or extremism as the categorical approach of each faith. Many in attendance were entirely unfamiliar with progressive Judaism and progressive Islam so there was a need to show how 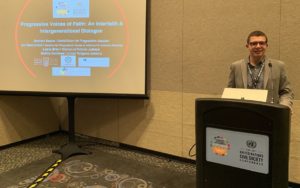 core texts of each religion can be interpreted in a way that is open and inclusive as opposed to how orthodox and conservative, faith-based organizations do.

Second, was to demonstrate the necessity and opportunity for progressive faith communities to partner together against all forms of hate and bigotry. Panelist Martha Gallahue shared the very successful model of URI for bringing together people from all faiths in community settings to take on shared interests or initiatives.

Third, and last, to show that progressive faith communities and organizations are necessary components of civil society and eager catalysts of the United Nations Sustainable 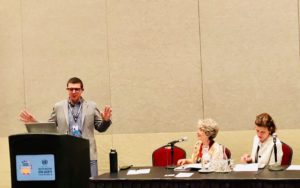 Progressive faith-based organizations embrace the notion that sacred texts serve as inspiration and motivation to “pursue justice” and this moral imperative is one that requires us work towards a better world. To that end, conference attendees were asked to contribute to a shared Outcome Document which serves as a call to action for NGOs like the World Union and its affiliates to make progress towards achieving the Sustainable Development Goals inside and outside the UN system.

Please fill out this form to share "Our Progressive Values at the United Nations Civil Society Conference" via e-mail.