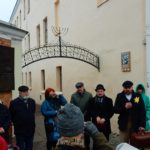 For five years, a march dedicated to the memory of the victims of the Holocaust has been held in Grodno. In mid-March, the city remembers people who were killed during the Second World War. Of the nearly 30 thousand Jews who once lived in Grodno, only 200 people survived after the war. Two Grodno ghettos were destroyed on March 12, 1943.

Please fill out this form to share "[BELARUS] March of Memory at Grodno Ghetto" via e-mail.