The World Union for Progressive Judaism has distributed Russian language Plaut Chumashim to displaced Ukrainian Jews around the world so that they can continue to study and pray.

For more than 30 years the WUPJ has supported communities in Ukraine, Russia and Belarus by translating many of Judaism’s sacred texts into Russian – texts that were left behind as people had to flee their homes and communities. 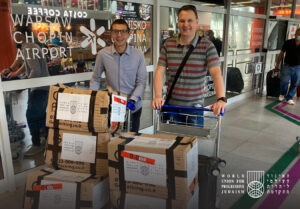 Washington, D.C. based Andrew Keene, a member of the WUPJ Management Committee, spearheaded efforts to get up to 500 new Chumashim into the hands of WUPJ communities and rabbis who are working with Ukrainian refugees. This included personally delivering copies to Rabbi Alex Dukhovny in Haifa and Rabbi Stas Wojciechowicz in Warsaw.

The beautifully bound Chumashim contain a Russian translation of the Torah and commentary by Rabbi W Gunther Plaut.

Andrew said: “Our Progressive Jewish communities in Europe and Israel are on the front line of resettling refugees from war-torn Ukraine. They are not only connecting Jewish refugees to community, social services and relief, but also to Judaism through worship and study. This is why we were so eager to send copies of this masterfully translated text to communities around the world. 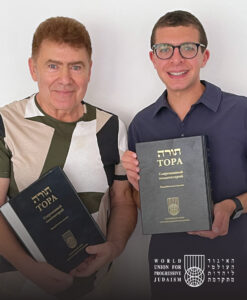 “It was especially meaningful to deliver the first copies to Rabbi Dukhovny in Haifa – who for many years has served as the Senior Rabbi of Progressive Jewish communities of Ukraine – for his use with Ukrainian refugees and olim (immigrants).”

Rabbi Igor Zinkov of The Liberal Jewish Synagogue in London, who is Co-Chair of the WUPJ Ukraine Crisis Committee, grew up in Russia and has family and friends in both Russia and Ukraine.

He stressed the importance of providing Jews with Torah in their language, saying: “Historically Torah has been a uniting factor for Jews around the world. It represents Jewish people, our wisdom and constant search for meaning and the sense of belonging. It is also essential for development and growth of what we, Progressive Jews, believe in.

“It is heart-warming to know that even during the current crisis, Torah serves its purpose and continues to nurture and support all those who flee from war in Ukraine.”

Please fill out this form to share "World Union distributes Russian language Plaut Chumashim to displaced Ukrainian Jews around the world" via e-mail.