The World Union expresses its concern about the current situation in Belarus. We send our thoughts and prayers for peace in Minsk and Belarus during this challenging time. 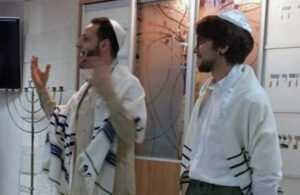 News of the arrest of two Netzer FSU members quickly spread across social media. The World Union reached out to our rabbinic and communal leadership in Belarus for comment. We encourage you to get informed about the situation and act to support in any way you can; email Rita Fruman, Director of WUPJ Operations and Programs in the FSU, for more.

From Rabbi Grisha Abramovich, from the Sandra Breslauer Beit Simcha Center in Minsk and the Religious Union for Progressive Judaism in Belarus:

“These days are very alarming for Belarus. Our joy from the first online project in the history of Shabbat Belarus Canada, with the participation of the chair and president of the WUPJ, was replaced by excitement and anxiety in the evening the next day. Two former leaders of the Tamar community, leaders of Netzer, Arthur Raisky and Albert Kengerly, were arrested in Minsk. Without doing anything criminal, they simply ended up in the wrong place and at the wrong time, but this turned out to be enough for them to spend more than three days arrested away from their relatives and friends. Hearing the disturbing voice of Arthur father and the voice in which both the indignation and powerlessness of Albert’s mother is as difficult as waiting for news from the children every day. Albert’s mother handed over to her son a siddur, which was made in one of the Netzer camps. According to her, for Albert, this is no less important than those chocolates with which she wanted to support her son. Over the past few days in Belarus, we have faced a disruption in the Internet, with detentions, among whom there are activists of our communities, but there was not a minute without the support of the Jewish community and our movement, which is so important in sorrow and joy.”

“Recently we learned that Arthur Raisky was released and is awaiting trial, Albert Kengerly is still in prison. We are in constant contact with the relatives of the children, we try to help and support.

We are proud to live in Belarus, where wonderful, sincere, hardworking people, beautiful nature.

Belarus is often called long-suffering. Our country lost every third inhabitant during the Second World War. 90 percent of the Jews in Belarus were killed in the fire of the Holocaust. There is a revived Jewish community in the country that would like to develop in a prosperous Belarus where human rights are respected.

We have received many warm letters of support. Thank you for your solidarity!”

From Rita Fruman, Director of WUPJ Operations and Programs in the FSU:

“It’s hard to understand this difficult situation, but I love Belarus and the people living there are good, kind and honest.

Over the past couple days I can’t stop worrying and the situation is tearing me apart.

I cannot get in touch with my parents living in Grodno for two days because the internet has been shut down across the country. Thank God today we can talk and I know they are ok, if it can be ok under these circumstances!

Two of our Netzer activists were arrested Saturday evening, one of them, Artur, was released but is awaiting trial and we still didn’t know what happened with Albert. He is still detained.

I know that Belarus people from all over the world are praying for their families and friends, and I am one of them.

I know that all our Jewish friends from all over the world are praying for Belarus people and I want to say thank you for all of them!”

Jewish and Israeli English-language media writing about the situation:

• “Why Israel should care about revolution in Belarus,”
by Anna Rudnitsky, Times of Israel, August 12, 2020

For more about the World Union and Progressive Judaism in Belarus, click here.

Please fill out this form to share "[BELARUS] Update from WUPJ Progressive Rabbis and Leadership" via e-mail.