The World Union mourns the passing of Jerry Tanenbaum Z”L, a long-time supporter and leader of the World  Union and our global Movement. Jerry served as WUPJ Senior Vice President, on the WUPJ Management Committee, on the North American Advisory Board, and chaired the WUPJ Yad B’Yad Task Force. In 1988, Jerry received an Honorary Life membership to the WUPJ Executive Board, and in 2000, Jerry was honored with the WUPJ’s highest honor, the International Humanitarian Award. 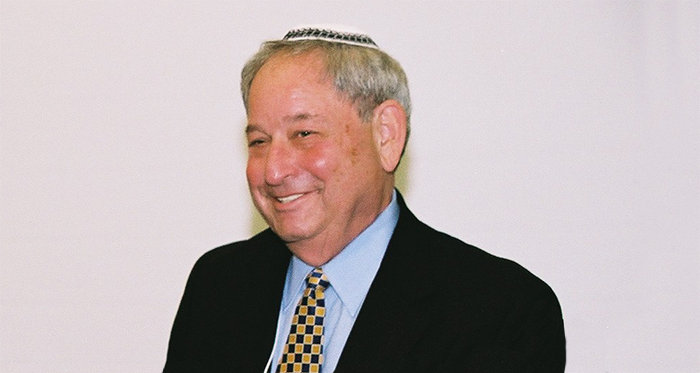 Below are reflections on Jerry’s impact and legacy as shared by our leadership, regions, and partners:

Jerry was one of a kind – a mensches mensch a human’s human – he was indeed betzelem Elohim – made in YHVH image.  He answered “Hinenini” (i am HERE) to our dear friends in South America and all over the world.  His leadership in the WUPJ was legendary, his heart so big I don’t understand how it fit in his chest.  He taught me and mentored me in WUPJ – and he loved without limit.  The world has lost a giant of a man.  Ina Bauman and I love you and your memory is a blessing for us and all. — Steven Bauman, NAAB member

Jerry was a dear friend to many, including me; we worked together on so many projects over more than two decades.  I admired him for his commitment to equality and service to the Jewish community and all people, locally, nationally, and throughout the world.  He touched and enriched so many souls through his actions and his booming voice.  Because of Jerry,  the world truly a much better place.  He was a beautiful role model, and he will be missed! He remains with us in memory, and that is a blessing. — Steve Bresulauer, NAAB member

> From the Union for Reform Judaism (URJ):

In the words of Rabbi Richard “Dick” Hirsch:

Jerry was an unforgettable character.  He was “achad b’mino” one of a kind, unique.  In my entire experience with our Progressive-Reform movement there was no one so committed, so concentrated, so single minded, so loyal, so stubborn. He was loyal to the cause, and he was loyal to the people who committed their lives to the cause. When it came to the Progressive movement in Latin America, Jerry was the most dedicated lay leader we ever had. He inspired others with his advocacy, and he mobilized support. He was fortunate to have Pat z”l as his beloved life partner who always stood with him and who shared his views and activities with pride. It was a privilege and a pleasure to be in his company.  He was firm in his opinions, but with a jovial personality.

With great sadness we, at UJR, report the loss of dear friend and partner of our region, Jerry Tanenbaum z ′′ l.
Jerry first came to our region with a mission to Latin America in the Argentine crisis in 2001, with Rabbi Uri Regev, president of WUPJ, Rabbi Joel Oseram VP in the international area and with the full leadership of WUPJ. Thus he provided great humanitarian aid from WUPJ to Argentina. On this same trip, they went through São Paulo and from there, Jerry was instrumental in the structure of reformist Judaism in Latin America. On the return of this trip, he created the Yad be Yad Task Force, an arm of WUPJ for Latin America, supporting us with project capture and feasibility.
He came to Latin America several times and was present at all our congresses. He was a great motivator for the donation of sifrei Torah to our communities. In Chile, we rescued a WUPJ Torah with your support; in Argentina, it made a great work with Rabbi Sergio Bergman, who was a great friend; created a fund for educational help in Costa Rica; and created ′′ The Pat z ′′ l and Jerry Tanenbaum Fund for WUPJ-Latin America ′′ an invaluable contribution to the region. WUPJ Vice President in Ruth Cohen’s management, Jerry was a great advocate, great supporter, great Zionist, humanitarian, a man with a huge heart. From Hot Springs in Arkansas, it had a strong funny South American accent that made us play subtitles when speaking. Jerry was the driving force of our region, a mentor and a great friend to our leaders.
We will miss you [,Jerry,] so much.

May his memory be for a blessing.

Please fill out this form to share "[NORTH AMERICA] Mourning the Passing of Jerry Tanenbaum, Z”L" via e-mail.