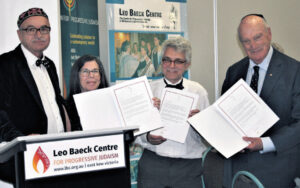 Supporters packed into the Leo Baeck Centre for Progressive Judaism (LBC) in Kew on November 23 for a festive dinner celebrating the shule’s 70th anniversary.

In an address, Rabbi Dr John Levi, an emeritus rabbi of Temple Beth Israel, who has had close ties to LBC for most of those seven decades, harked back to the years after World War II when “the Holocaust was recent and brutal, we could hardly speak of it … logic should have said to us all, ‘It’s time to give up’ and some did. But 16 people in Camberwell attended that initial and fateful meeting” in November 1949 to found what would later become LBC.

He paid tribute to Rabbi Leo Baeck, a leading German rabbi who survived Auschwitz to become president of the World Union for Progressive Judaism and a renowned Jewish teacher at the Hebrew Union College and at London’s Leo Baeck College, where LBC’s Rabbi Jonathan Keren-Black received smichah.

Before a synagogue centre was completed in 1970, Rabbi Levi approached Rabbi Baeck’s daughter about using his name. “She readily agreed and in her letter she recalled Baeck’s basic belief: God’s commandment is to live.”

He said the rollcall of LBC stalwarts rings with names such as Dr Leon Taft and his family, the music of Maurice Duband, and the rabbinical leadership through the years of Rabbis Brian Fox, Seth Phillips, Betsy and Michael Torop, and Rabbi Keren-Black.

Howard Nathan, a former Victorian Supreme Court justice, spoke of Progressive Judaism’s commitment to diversity in a Melbourne that decades ago was not culturally diverse. He said, “We are the vanguard … may we always be the vanguard.”

Originally published in The Australian Jewish News on Dec 6, 2019.