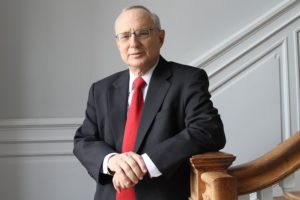 Rabbi David Saperstein, the long-time Director of the Reform Movement’s acclaimed Religious Action Center of Reform Judaism (RAC), who served as U.S. Ambassador for International Religious Freedom during the Obama Administration, will serve as President of the World Union for Progressive Judaism (WUPJ) in 2019-2020.

Carole Sterling, Chair of the Board of the WUPJ, announced the appointment, explaining:

We are truly excited about Rabbi Saperstein’s leadership this year for the World Union. It is vital to us, during this transition year, that there be strong leadership at the helm, someone of prominence and achievement, who understands the needs of our movement and members in North America, Israel, and around the world. We are honored that Rabbi Saperstein accepted our invitation to serve in this post.

As we announced at our annual International Humanitarian Award Dinner in May, we have selected a strong successor to lead the World Union as its new President beginning no later than the summer of 2020. We are confident that Rabbi Saperstein and his successor will continue the growth in congregations, rabbinic leadership training, and youth engagement that marked Rabbi Daniel Freelander’s leadership.

Rabbi Saperstein is one of America’s most widely-known and highly-respected rabbis with extensive connections across religious, ideological, and political spectrums. Newsweek Magazine has called him the most influential rabbi in America and the Washington Post called him, “the quintessential religious lobbyist on Capitol Hill.”

The first rabbi to hold the title of U.S. Ambassador, Rabbi Saperstein dealt directly with the ministries of religion, justice, and foreign affairs in the 32 nations he visited, and developed deep ties with religious leaders and institutions in nations across the globe, including with many of our World Union congregations.

An attorney as well as a rabbi, Rabbi Saperstein taught church-state law and comparative Jewish and American law at Georgetown University Law Center for 35 years. He has authored and edited several books on Jewish social justice themes and his articles have appeared in a number of academic and news publications including the New York Times, the Washington Post and the Harvard Law Review.

From his earliest childhood, Rabbi Saperstein has had deep personal ties to the WUPJ. His father, Rabbi Harold Saperstein, was a North American Chair of the World Union, served stints for rabbis on sabbatical at congregations in Great Britain and in South Africa, and, with his wife, Marcia, visited with many of our WUPJ congregations in their travels to more than 80 countries. His brother, Marc Saperstein, is a distinguished Jewish historian who has served as the Principal of WUPJ’s partner institution, Leo Baeck College in London.

Throughout his own career, Rabbi Saperstein has worked closely with the World Union: serving as a plenum speaker at numerous WUPJ events and conventions; speaking at, and consulting with, many WUPJ congregations; visiting many others, particularly during his recent tenure as U.S. Ambassador. Rabbi Saperstein also has deep ties with the Israel Movement for Progressive and Reform Judaism (IMPJ), working closely with the Israel Religious Action Center since its inception.

Rabbi Saperstein will continue with some of his responsibilities as the Senior Advisor for Strategy and Policy to the URJ and the RAC.

Please fill out this form to share "Ambassador (Rabbi) David Saperstein to Serve as President of the WUPJ" via e-mail.