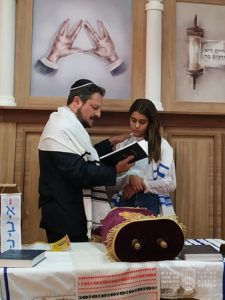 In 1600, the Koschers were one of the three Jewish families who settled in Ivye. In 1870, a descendant of this family, Eleazar Koscherov, built the first brick house in the town. Being a good builder, Eleazar later helped build not only a synagogue, but also a mosque.

The Jewish life ended in Ivye on May 12, 1942, the day the community was eliminated during the Holocaust. On that day, 56 people from the Koschers family were killed.

Eleazar Koscher’s great-granddaughter, Tamara Borodach, was among the first who, in the early 90s, proposed to revive Jewish life in Ivye and Lida. Tamara, head of an international project called “Roots”, worked with the town’s authorities and clergy to establish a monument dedicated to four religions (Russian Orthodox, Catholic, Islam and Judaism) active in Ivye, and open a Museum of National Cultures – the first and only of its kind in Belarus. The Museum is located in the school building where Tamara once studied.

On August 3, 2019, Tamara’s granddaughter, Mika Arad, who was born in Jerusalem, held her Bat Mitzvah ceremony in the Museum of National Cultures, in the gallery on the history and traditions of the Jewish people. Mika had grown up on the stories from her grandmother about Ivye and Jewish life. Rabbi Grigory Abramovich led the ceremony using a Torah scroll from Shalom congregation in Lida, which was brought by Bella Dvilyanskaya. 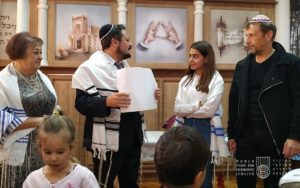 Eight years ago, the scroll was donated by the Kol Ami Emanuel Community in Florida. And today, it serves as the first and the only Torah scroll to serve Lida and its surroundings since 1942. Guests travelled from all over the world and country to attend Mika’s Bat Mitzvah.

The Bat Mitzvah certificate was signed by Andrei Dorofeev, Chairman of the RUPJ in Belarus, and Michael Kemerov, the Executive Director of the RUPJ in Belarus. Mika’s mother, Olga, and other relatives and guests warmly congratulated the girl. The ceremony was consecrated as a landmark event for the life of the town.

The event extended the celebrations of Bat Mitzvot in the region – as two Bat Mitzvah ceremonies were held in Lida earlier this year. The granddaughter of Shalom Community’s chairman, Irina, and the Rabbi’s daughter, Alisa, both came of age and received the certificates for their training and growth at Lida Castle.

2019 was declared as the Year of the Small Homeland in Belarus, offering a national celebration of the past and present of Belarusian Jews. Mika’s Bat Mitzvah in Ivye, which is called Belarusian Jerusalem, is the best evidence that the Koschers’ family generation continues to inspire and strengthen Judaism in Ivye and around the world. 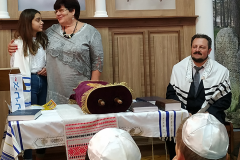 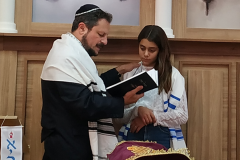 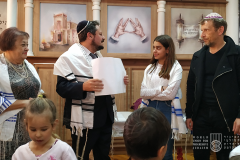 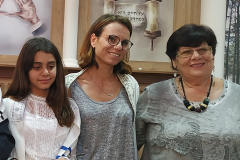 About the author: Rabbi Grigory Abramovich serves the Sandra Breslauer “Beit Simcha” Center in Minsk and leads its role in the Religious Union for Progressive Judaism in the Republic of Belarus.

Please fill out this form to share "[BELARUS] First Bat Mitzvah in Ivye" via e-mail.