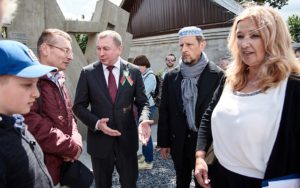 Andrey Dorofeev, Chair of the RUPJ in Belarus; Michael Kemerov, Executive Director; and Tamara Vershitskaya, founder and curator of the Jewish Resistance Museum in Novogrudok; with Vladimir Makei, the Minister of Foreign Affairs of the Republic of Belarus.

Marking the 75th anniversary of the liberation of Belarus from Nazi occupation during World War II, the capitol city of Minsk, as well as Novogudok, located 150 km southwest, hosted commemorative events for the ‘Memorial Days’ festivities.

The anniversary proved to be significant not only for the country’s Jewish community, but the entirety of the Republic of Belarus.

Memorial Days celebrations welcomed guests from around the world, including Israel, USA, Canada, the UK, Australia, Germany, Poland and Russia. The Minister of Foreign Affairs of the Republic of Belarus, Vladimir Makei, attended the celebrations, among other diplomats. 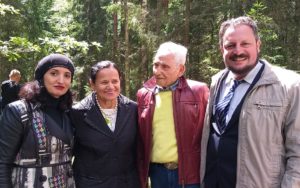 The Jewish Resistance Museum unveiled a memorial wall and an outdoor exhibition on the territory of the city’s former ghetto as part of the anniversary event. Founder and curator of the Museum of Jewish Resistance in Novogrudok, historian Tamara Vershitskaya, coordinated the ceremony.

Martin Wolfe, attending from Canada,  spoke of his relatives who participated in the Jewish partisan unit during World War II, and of the memory of the Holocaust and the values of the Peace. Rabbi Grisha Abramovich, from the Sandra Breslauer Beit Simcha Center in Minsk and the Religious Union for Progressive Judaism in Belarus, read Kaddish in memory of the victims. 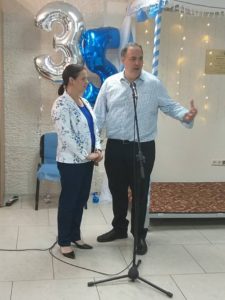 “I am witnessing a miracle,” Wolfe said, reflecting on his experience in Belarus. “For a community that was not allowed to practice Judaism under Communism and for the families who did not have any Yidishkeit or traditions, the introduction of Judaism into their lives and their acceptance of religion step-by-step is miraculous.”

After more than 800,000 Jews from Belarus were killed during the Second World War, ‘Memorial Days’ celebrations paid respects to the victims and their families.

The anniversary celebration also displayed the resilience of the Jewish community in Belarus that is again robust 75 years later.

Please fill out this form to share "[BELARUS] ‘Memorial Days’ Celebrate Liberation of City and Renewal of Jewish Community in Belarus" via e-mail.