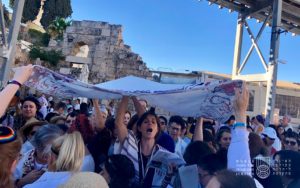 Eager but anxious, I walk past the barricades which keep ultra-Orthodox men from blocking the entrance, and step into the women’s section of the Western Wall. Weaving through the private security and appalled young Orthodox girls who surrounded the service, I join the circle of women singing, their prayer books raised proudly in the air.

I felt immediately drawn to the mission of Women of the Wall when the opportunity arose to attend their Rosh Chodesh service, the welcoming of the Hebrew month of Tamuz, during my time as an intern for the World Union for Progressive Judaism in Jerusalem.

Women of the Wall (WOTW) is a pluralistic Jewish feminist organization which fights for the rights of women to wear prayer shawls, read and pray aloud from the Torah at the Western Wall. They offer an outlet to practice Judaism in a way that challenges the often sexist aspects of religion I resent.

Knowing little about the organization, I threw myself into learning about the Women of the Wall. My excitement to join this empowered group of Jewish women immediately turned to fear. I questioned my decision to go.

At their 30th anniversary service in March 2019, violent protests by members of the ultra-Orthodox broke out, pushing WOTW members and supporters to the ground. According to WOTW, the police failed to fully intervene in the attacks. While the anniversary service was the most violent outbreak at a Women of the Wall event, protest has become synonymous with their monthly Rosh Hodesh services at the Kotel.

I was shocked to find out that Jews—a people I know to stand together through our differences—would go so far as to violently attack the prayer of their own people. Perhaps my idealistic view of a very complicated, diverse and pluralistic religion was naïve, but it hurt me see members of the ultra-Orthodox protest the way that I practice the same religion their lives revolve around, albeit differently.

Reports of protest and violence from past WOTW events scared and surprised me, but they didn’t stop me. I trusted the security WOTW instituted to ensure the safety of attendees and my acute awareness of my surroundings. Most importantly, though, I wouldn’t give the protesters what they want. They know their protest won’t change anyone’s opinion, but it will scare people from coming to WOTW services. I would not fall victim to their scare tactics; this cause is too important.

The love, power and inclusion I felt from Women of the Wall community drowned out the loudspeaker projecting an Orthodox service from the men’s section of the Kotel. I was moved by the tight circle of strangers who sang with arms around each other. I was brought to tears by the grandmother who tightly hugged her young granddaughter beside me. Sporting a sparkly polka dotted outfit, she resembled myself a decade ago. I felt an indescribable pride standing alongside these women for this powerful cause.

I observed the preteen Orthodox girls who surrounded our circle. They stood in protest, yelling and sometimes attempting to push their way past the security that surrounded us. A teenage girl stood in front of me, though wouldn’t look at me, blocking as I tried to take a photo of a kippah on the back of a woman’s head with the flags of Israel and of the United States.

The larger protest came after the service, as Women of the Wall leaders, Torah in hand, lead the group out of the women’s section to the exit of the Kotel. Security shielded our procession from boys and men screaming, pointing, and pushing themselves towards us. I don’t speak Hebrew, but anger, hatred and aggression need no translation.

The protest is not really about women wearing prayer shawls, singing, or reading from the Torah; it’s about power. The ultra-Orthodox see Women of the Wall as a threat to the monopoly they have in Israel over Judaism. Their protest is about shutting down any effort to undermine their control of the Israeli Rabbinate, which control religious sites and life cycle events, and challenge their powerful political block in the Knesset, which approves financial benefits and exempts them from army service.

Media coverage of Israel often places so much emphasis on the conflict between Jews and Arabs in this country that it fails to acknowledge the inter-Jewish conflict. I’ve read countless accounts of the struggle for coexistence between the diverse linguistic, cultural, and religious identities in this country, but I had no concept of the tension between the ultra-Orthodox and the rest of the Jewish-identified people of Israel. I can’t help but think that this is—at least in some way—an intentional effort to use Arabs as a scapegoat for the deep rooted and diverse problems of this country.

Attending a Women of the Wall service brought to light infuriating problems within Israel I didn’t know existed. But it also showed me that I can find meaning for myself in the Jewish homeland as a Jew whose life and practice don’t resemble the Judaism which controls places like the Western Wall. 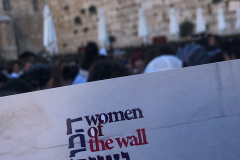 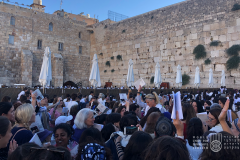 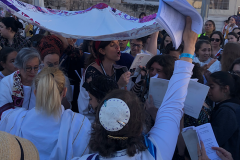 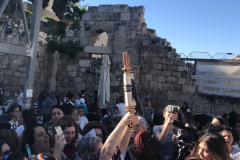 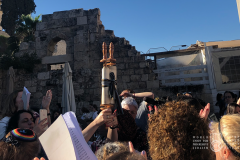 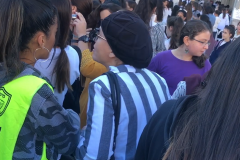 About the author: Kirby Goodman is a summer intern with the World Union in Jerusalem through Onward Israel. Originally from Minneapolis, Minnesota, she is a rising sophomore at Colgate University in Upstate New York, hoping to pursue a career in journalism after graduation.

Please fill out this form to share "[EDITORIAL] Powerful and Protested: My Women of the Wall Experience" via e-mail.