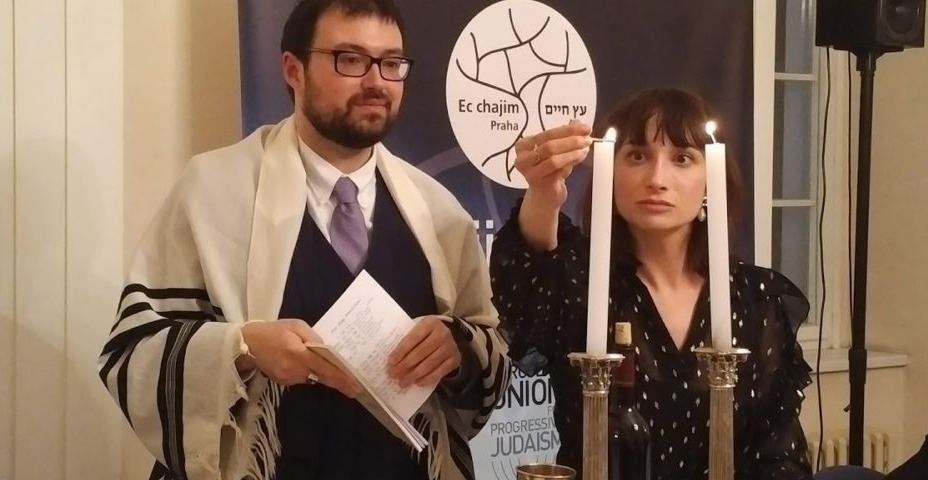 After several months of discussion and preparation, Ec Chajim held its inaugural Kabbalat Shabbat service and dinner at the Hotel Modré Růže Blue Rose Hotel in Prague on Friday March 8. About 120 people aged between one and 91, attended the event.

Dignitaries included Daniel Meron, the Israeli Ambassador to the Czech Republic, and his wife, Jill; Tomáš Kraus, Secretary-General of the Czech Federation of Jewish Communities (FJC), and his wife; Rabbi Edward van Voolen and Professor Ralph Selig, representatives of the Abraham Geiger College; David Pollak and Jonathan Wootliff, representatives of the EUPJ; members of the Ec Chajim Board; František Fendrych, the President of EUPJ member-community ZLU, and many friends and members of the Prague Jewish community. The service was led by student rabbi David Maxa accompanied by Judita Maxa Bergmannová (his wife) and Ralph on keyboard. David delivered an uplifting sermon and Tomáš delivered a fascinating account of the history of the Jewish community in the Czech Republic over the past 30 years. 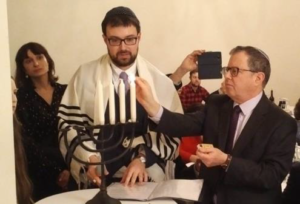 During the ceremony, Ec Chajim remembered the 3792 Jews from the Terezin family camp, who were murdered in Auschwitz on the March 8, 1944. It was the biggest mass murder of Czechoslovakian citizens ever. Four candles were lit, each one representing about 1000 Jews. As our honoured guests, Ambassador Meron and Secretary General Kraus lit the first two. Judita lit the third one in honour of her father, Pavel Bergmann, who was a survivor of the Terezin family camp. Anna Weberová was asked to light the final candle because she was the first Bat Mitzvah at which student rabbi Maxa officiated two years ago.

A group of 30 young adults from the VJS Nord, a Jewish group of students from the North of Germany, who were on a four-day cultural tour of Prague, joined the celebration on Friday evening. They livened up the proceedings with some enthusiastic singing and dancing during and after dinner. Ec Chajim was born as a direct result of discussions that first took place immediately before the EUPJ Biennial Conference in Prague in April last year. Following that meeting, the EUPJ formed the Prague Steering Group to offer further support and guidance in the development of pluralistic Judaism in the Czech Republic . The board is chaired by Anna Nosková and includes Anna, Katka Weberova, Mirek Daniel Rux, David Kraus and Judita Maxa Bergmannová, all of whom made significant contributions to the EUPJ conference last year.

About the author:
Darryl Egnal lives in Israel and is the Editor of the EUPJ Newsletter.

Please fill out this form to share "[CZECH REPUBLIC] New Progressive Community in Prague" via e-mail.