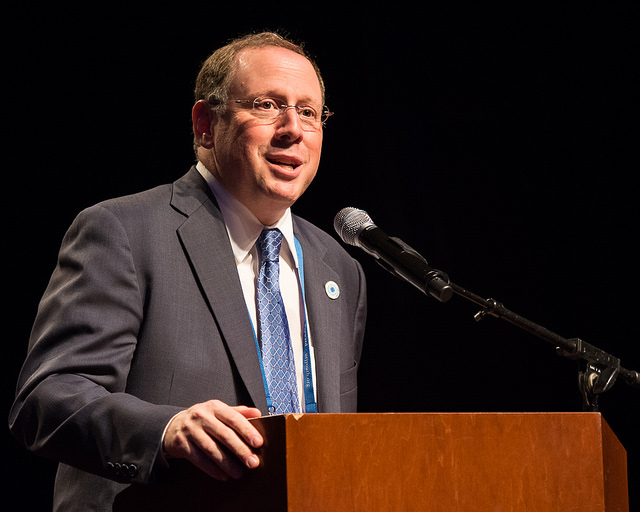 We are a proud, strong and supportive global Jewish family. On May 5, 2018, a leading and much loved member of our family – our beloved teacher, mentor, friend, visionary inspiration and partner, Rabbi Aaron D. Panken, died tragically and prematurely in a plane crash.

Rabbi Panken has served as the President of Hebrew Union College-Jewish Institute of Religion (HUC-JIR) since 2014. In addition to his many accomplishments, he was a stalwart and consistent supporter of the World Union. His travels took him around the world, and he always found time to visit our congregations.

We have received many notes of condolence from around the world, which we will share with our HUC-JIR family and Rabbi Panken’s own family – his wife Lisa Messinger and his children, Eli and Samantha.  We offer our deepest sympathy, heartfelt love and support to both the Panken and Messinger families.

Rabbi Panken touched many lives  in a meaningful and impactful way – as the keynote speaker at “Connections 2015” in Rio de Janeiro, as an attendee at our International Humanitarian Award Dinner, attending many regional Biennials and conferences , and spending sabbatical time in Australia.  He encouraged his rabbinical and cantorial students to explore new opportunities of serving Jewish communities in every part of the world.

His love and devotion to Israel ran deep, and is well known. He was extremely proud that he had the opportunity to ordain the 100th Israeli Reform rabbi in November, 2017.  It was a sign of his deep held belief in raising up exceptional and learned leaders  who would lead a more vibrant Reform/Progressive Judaism steeped in Jewish values and pluralism.

Many, many in our family  gathered in person and on line to pay tribute to Rabbi Panken on May 8,2018.  To listen to a recording of the funeral, click here.

In tribute to Rabbi Panken, we encourage you to dedicate your prayers, learning and doing of good deeds to his memory and keep his family close in your hearts.

May his good name and good works be an abiding blessing to us all, as we continue his legacy.

Please fill out this form to share "In Memory of Rabbi Aaron David Panken z”l" via e-mail.