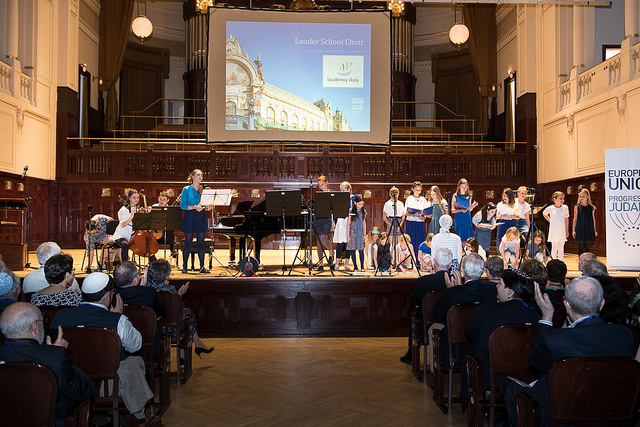 More than 350 delegates from 28 countries assembled in the beautiful city of Prague to celebrate the Biennial Conference of the European Union for Progressive Judaism (EUPJ).

Beginning on Thursday 26th April, an opening ceremony was held in the Smetana Hall within the Municipal House and included welcoming messages from the President of the Jewish Federation, Petr Papoušek, the Mayor of Prague, Adriana Krnácová, the Israeli Ambassador to the Czech Republic, Daniel Meron, EUPJ chairman Miriam Kramer and the President of the WUPJ, Rabbi Daniel H. Freelander. In addition, the audience of almost 400 were entertained by the children’s choir of the Lauder School, a short video recording the history of the Jews in the Czech Republic, a fascinating address by the world-renowned illustrator and artist, Mark Podwal and a world premiere of an organ arrangement of Smetana’s Vltava by organist, Ian Shaw. The ceremony was enhanced by a nostalgic welcome to the stage of one of the children saved by Sir Nicholas Winton as well as his son and grandson. The ceremony was followed by cocktails and canapes with music supplied by the Lauder School band.

After such an uplifting opening, the conference was in full swing on Friday with plenaries presented by eminent sociologist, Dr. David Hirsh and Jean-Marc Liling, Executive Director of the Centre for International Migration and Integration in Israel. 16 workshops were offered covering subjects ranging from anti-semitism in Europe to Leadership across the generations, social entrepreneurship to creating a sustainable future, an examination of whatever happened to the European ideal to education matters and emerging communities and interfaith issues. Needless to say, with so many people coming from as diverse a selection of backgrounds as can be imagined, the questions asked and discussions that took place were provocative, thought-provoking and inspiring.

Friday came to a rousing conclusion with a service, led by Rabbi Tom Kucera and ably assisted by student rabbi David Maxa, cantor Jaroslava Maxova, and student cantor Ivan Kohout, in the truly awesome setting of the world-famous Spanish synagogue. The synagogue has rarely, if ever, witnessed a service such as this, attended by more than 350 worshippers. The theme of the conference, Regeneration, could not have been more appropriate. The day ended with a Kabbalat Shabbat dinner in the ballroom of the Marriott Hotel when all delegates sang, danced and enjoyed the music of a 7-piece klezmer band and the food and wine which, throughout the weekend, reached heights that none of the delegates could recall at any previous conference. In fact, throughout the conference, from breakfast to morning and afternoon coffee breaks and dinners, everyone enjoyed a gastronomic extravaganza.

On Saturday, after morning study sessions, we celebrated Shabbat once again, in the Spanish synagogue. Highlights of a service led by Rabbi Aaron Goldstein and Cantor Zoe Jacobs, featured Rabbis Andrew Goldstein and Joel Oseran delivering a d’var torah and sermon, rabbis and conference chairman, David Pollak, chanting the week’s portion and haftarah and an historic handing over of a scroll provided by Rabbi Katz of Hendon Synagogue to the President of one of the two local Progressive synagogues, ZLU. The morning service was truly magical.

After lunch, tours set out across Prague and beyond and the day was brought to a triumphant close when approximately 250 delegates gathered together for Havdalah, led by delegates who had attended the New Generation Leadership seminar prior to conference. Rarely has an EUPJ Biennial Conference witnessed such an uplifting conclusion to the Shabbat. After that, there was only one way to complete the day and that was at the traditional Saturday late-night cabaret featuring as wide a variety of acts, performed by the delegates for the delegates, as we could have imagined.

Sunday morning offered a final plenary session which introduced Michael Zantovsky, Czech diplomat and politician to the delegates. This was followed by a lively discussion and debate which reflected on the 70 years since Israel Independence and questioned the fulfilment of the promises made by the Israel State. Ambassador Daniel Meron, together with Reuven Marko, chair of the Israel Movement for Reform and Progressive Judaism (IMPJ), Rabbi Lea Muehlstein, chair of Arzenu and Rabbi Daniel Freelander all combined to defend, justify and on occasions, apologise for the activities of the state of Israel. 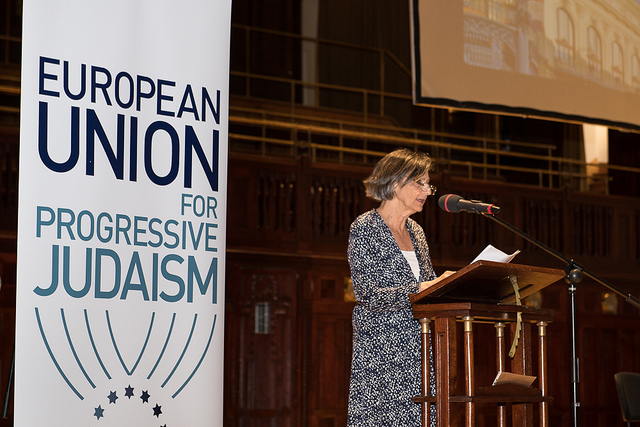 After such a rousing morning, which also featured the presentation of an honorary fellowship to Rabbi Francois Garai by the Dean of the Leo Baeck College, Rabbi Charles Middleburgh, all that was left was the Annual Assembly which apart from the formal business, said a fond farewell to outgoing chair, Miriam Kramer and a welcome to the new chair, Sonja Guentner. Proceedings were brought to a successful conclusion by Rabbi Harry Jacobi with a closing prayer delivered in his own, inimitable style.

To learn more about our international activities and upcoming regional biennials you can attend, click here.

Please fill out this form to share "[Prague] Post-Biennial Round-up: On “REGENERATION – Building the Future” by the European Union for Progressive Judaism" via e-mail.