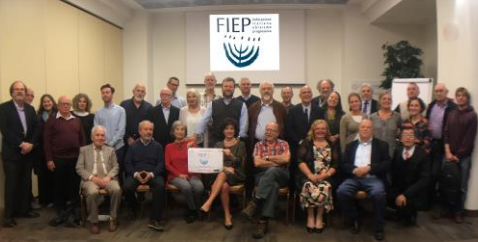 The General Assembly of FIEP elected as co-Presidents Joyce Bigio (Lev Chadash, Milan) and Franca Eckert Coen (Beit Hillel, Rome), with Sandro Ventura (Shir Hadash, Florence) as Secretary. All three leaders have been tireless advocates of Progressive Judaism
in Italy for many years and are not only well respected within the
ranks of FIEP, but are also well-known by members of the general Jewish community in Italy.

The congregational delegates to this inaugural FIEP General Assembly meeting discussed the many challenges that confront the Progressive movement in Italy. The most pressing issues include: How can FIEP best utilise its national framework to encourage and benefit each local Progressive congregation?; how should FIEP
relate to the established Italian Jewish Community umbrella organisation (UCEI), which has never officially recognised the legitimacy of Progressive Judaism?; and how should FIEP relate to the Italian governmental authorities, which, up until now, have only recognised UCEI as the representative body for all Jews in Italy?

Acknowledgement should also be made of the fact that the European Union for Progressive Judaism (EUPJ), the umbrella organisation uniting all Progressive movement bodies in Europe, was officially represented at the FIEP General Assembly by David Pollak, EUPJ
Treasurer. No stranger to Progressive Judaism in Italy, he made the trip to Florence from London to chair the one-day meeting as a demonstration of the support and leadership the EUPJ is committed to provide to FIEP. And fortuitously, Rabbi Joel Oseran, who also serves as Vice-President Emeritus of the World Union, brought special greetings to the General Assembly on behalf of the worldwide
organisation.

The stage is now set for Progressive Judaism, with the full backing of both the regional and international Progressive movements, to chart its new course in Italy.

This historic gathering, fully aware of the challenges that lay ahead, ended the General Assembly by singing the Israeli anthem – Hatikva.
Hope indeed filled the hall – hope for the thousands of Jews in Italy who are in search of a Judaism that will respond to their contemporary needs while preserving the noble traditions of Italian Jewry. This is the search that will lead to the doorway of Progressive Judaism in Italy. Baruchim Habaim – Welcome to all.

Please fill out this form to share "A New Beginning for Progressive Judaism in Italy" via e-mail.