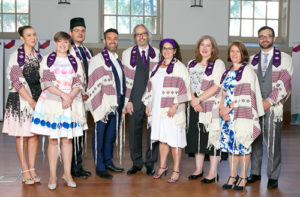 Rabbi Haim Casas will make history when he returns home to begin work in communities in Spain, as well as France and Switzerland.

He was one of the class of seven new rabbis ordained in front of 500 guests at West London Synagogue after studying for five years on Leo Baeck College’s acclaimed rabbinic programme.

Leo Baeck College Principal Rabbi Dr Deborah Kahn-Harris said: “In our 60th anniversary year, we could not be prouder to be carrying on the heritage of this transformational institution through these seven inspirational rabbis.”

The ordination of Haim, who was born and raised in Córdoba, was especially poignant, as the Jewish community in Spain has only re-emerged very recently. Jewish people were expelled from the country, or forced to convert to Christianity, in 1492 and it has taken five centuries for Judaism to return in a meaningful way – either through Spanish people discovering their Jewish roots or Jews from other countries moving there.

Speaking on BBC Radio 2, Rabbi Baroness Julia Neuberger of West London Synagogue said: “The accepted wisdom that Jewish life in Spain has ended has been overturned. Haim’s ordination was both a sign of hope and a statement of belief in a Jewish future in Spain.”

Leo Baeck College is a preeminent institution of Jewish scholarship and learning. Almost every serving Liberal and Reform rabbi in the UK, and many abroad, trained there. The College previously made history with the ordination of Britain’s first woman, openly gay and transgender rabbis, as well as the first Progressive rabbis to take up post in the former Soviet Union.

*This article was reprinted from the blog of the Movement for Reform Judaism.

Please fill out this form to share "Leo Baeck College Makes History as Seven New Rabbis are Ordained" via e-mail.