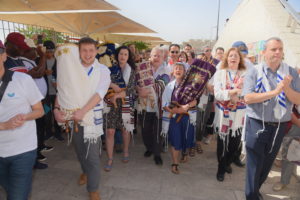 This reversal of a promise made by the Israeli Government, under pressure from the Ultra-Orthodox, is a betrayal of Israeli and Diaspora Jewry.

The Diaspora stands with Progressive Jews in Israel in continuing the fight for an egalitarian prayer space at the Kotel.

The majority of Jews in Israel, and all around the world, believe in egalitarianism, and the rights of people to pray in the manner they wish.

We once again stand with the Israel Movement for Reform and Progressive Judaism as they take this legal battle to Israel’s Supreme Court.

In any democracy, promises are but for a moment and when the leaders who made them fail us, we must take up the banner once again and march on in the direction of equality, justice and inclusion

Please fill out this form to share "A Statement by Rabbis Laura Janner-Klausner and Danny Rich on Behalf of Britain’s Alliance for Progressive Judaism Israel Desk" via e-mail.