Every year, the Sociedad Israelita Brasileira (SIBRA) Congregation in Porte Alegre, Brazil, of which I am the President, comes together to celebrate Passover in a communal seder. This year, drawing upon years of the good and deep relationship between both our communities and spiritual leaders, the Archbishop of Porto Alegre, Dom Jaime Spengler, invited SIBRA congregants to hold a demonstration of our seder for his constituents. Our rabbi, Rabbi Guershon Kwasniewski, countered with the following offer: let’s hold a real seder, not a demonstration, on the very date of the holiday’s start, and let’s do it inside the cathedral. It will not be for the priests, but rather for Jewish and even Catholic congregants to participate and attend. And they agreed, responding that it was an excellent idea. 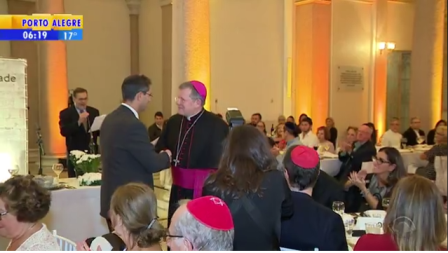 We were pretty sure that something like this had never happened before in Brazil, which made the event more significant and important to all SIBRA members. Many volunteered to help run the seder and with assorted related logistical tasks. We also received a great deal of local coverage for the venture, which you can click through to read about in the following links:

The event was mentioned in the Brazilian Senate and the Brazilian President, Michel Temer, sent a letter to Congregation SIBRA. You can also read the beautiful letter from our regional leadership, Raul Gottleib and Miriam Vasserman in support and recognition of this special event by clicking here.

Please fill out this form to share "From the Halls of a Cathedral, Echoes of a Seder: SIBRA Celebrates Passover in Unique Ceremony" via e-mail.