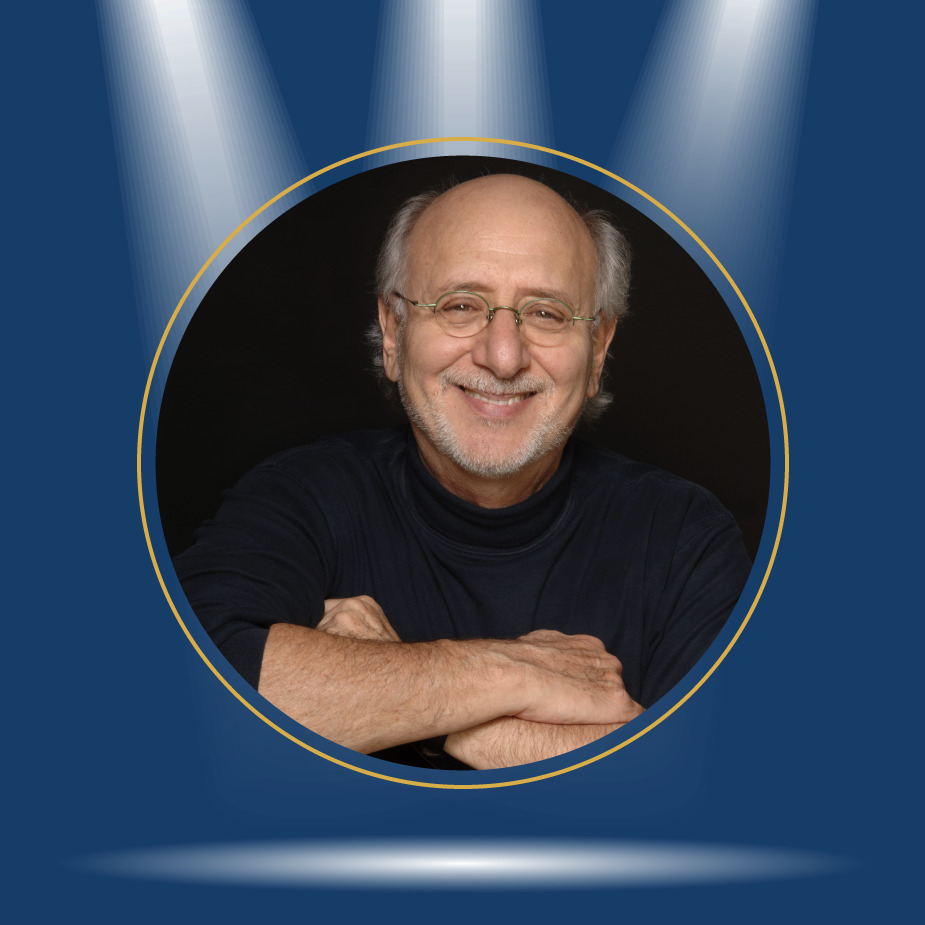 “We’re part of a long train ride,” is the way Peter Yarrow visualizes the many events that have highlighted a career spanning more than five decades. With characteristic care, Yarrow places the success he’s had within a greater context, seeing his accomplishments as part of a tradition, to be credited as his inspiration and carried on. “When I was in high school,” he recalls, “I heard The Weavers at Carnegie Hall singing songs like ‘If I Had a Hammer’ ‘Follow The Drinking Gourd’ and ‘Wasn’t That a Time.’ I was stunned by the extraordinary effect that music of conscience can have on people, particularly when they sing songs of conscience together.” That lesson launched Peter on a lifelong journey that is now, perhaps, in its most vital phase.

Over the years, many issues have moved Peter to commit his time and talent: equal rights, peace, the environment, gender equality, homelessness, hospice care, public broadcasting and education. All have utilized his skills as both a performer and an organizer. Along with his singing partners, (Noel) Paul and Mary, Peter became deeply committed to the Civil Rights Movement, which brought them to

Washington in 1963 to sing at the historic August 28, 1963 March On Washington led by Dr. Martin Luther King, Jr., as well as the equally historic Selma-Montgomery March in 1965. When the Civil Rights Movement merged its efforts into the Peace/Anti-Vietnam War Movement, Peter produced numerous large events including peace concerts at Madison Square Garden and Shea Stadium with tens of performers. These efforts culminated in his co-organizing with Cora Weiss, his friend and ally and a Nobel Peace Prize nominee, the famous1969 “Celebration of Life”, a march and demonstration in Washington, Dc attended by a half-million people who demanded an end to America’s military involvement in Vietnam.

Though much of Peter’s activism has been directed toward the social/political arena, Peter has also been active on behalf of more personal projects such as the Hospice Movement. He is a board member of the Connecticut Hospice, the first hospice established in the United States, where he periodically sings for patients and staff and for whom he has been a voice of media advocacy for over two decades. Also, in 1996, Peter founded the “Save One Child” Fund, now centered at Roosevelt Hospital’s Institute of Neurology and Neurosurgery (INN) in New York City. Over the last fifteen years, Save One Child has provided free interventional radiological and neuro-surgical treatment, saving the lives of over 200 children who have been brought from all over the world with their families, all expenses paid.

A concert by Peter, today, is exciting, moving and also entertaining but it is also an event that follows in the tradition of his early mentors, The Weavers and Pete Seeger. Peter intentionally uses his music to create a community of acceptance from the stage, an “oasis of peace” as he calls it. His gift for songwriting has produced some of the most poignant songs Peter, Paul & Mary have recorded, including “Puff, the Magic Dragon,” “Day is Done,” “Light One Candle,” and “The Great Mandala.” As a member of the renowned musical trio, he has earned many gold and platinum albums and has been awarded and nominated for numerous Grammys.

Peter has explored his talents in filmmaking as well, producing the critically acclaimed feature, “You are What You Eat,” as well as co-producing three CBS network animated television specials based on “Puff, the Magic Dragon,” for which he received an Emmy nomination.

Nurturing and validating the talents of new songwriters who, as Peter describes, “write from the heart”—as opposed to focusing on the marketplace—has been central to Peter’s journey throughout his career. In 1962, he became a founding board member of the Newport Folk Festival, and in that context conceived of and hosted a special Sunday afternoon concert dedicated to emerging folk performers and songwriters. The New Folk Concert gave important early recognition to artists such as Buffy St. Marie, Eric Anderson and Tim Hardin.

In 1972, building on this concept, Peter worked together with his friend, Rod Kennedy, the creator/producer of the newly formed Kerrville, Texas Folk Festival to create an event that, since 1972, has recognized new songwriters who write songs that echo the historical intentions of traditional folk music; music of caring, sensitivity and conscience. Together, Rod and Peter co-organized the New Folks Competition that became the signature event of festival. Now, this yearly event is arguably the most respected platform in America for recognizing and launching new singer/songwriters.

Peter’s achievements have afforded him the skills and the experience needed to address what he considers to be perhaps his most meaningful and ambitious undertaking to date. In 1999, Peter launched an educational non-profit called Operation Respect: “Don’t Laugh At Me” that is based on his passionate belief that music can be a transformative tool for educating the ethical sensibilities of children. Peter believes that educating children’s social and emotional growth is at least as important as nurturing their intellectual and academic skills. The anthem of Operation Respect is the song, “Don’t Laugh at Me”, written by Steve Seskin and Allen Shamblin that was discovered by Peter’s daughter, Bethany Yarrow, at the Kerrville Folk Festival. Unlike anti-bullying efforts that rely on punishment and harsh disciplinary methods (that Peter asserts, simply ‘don’t work’) OR focuses on creating a positive, safe, respectful, bully-free school environment in which such asocial and frequently dangerous behaviors will be far less likely to occur, and where students can grow and learn, free of torment and attacks by their peers. Taking its name from the song, OR’s educational program called “Don’t Laugh At Me” is now incorporated in some fashion in an estimated 22,000 schools across America.

Peter Yarrow’s life and work, culminating in the founding and leadership of Operation Respect, embraces the premise that if each person finds a way to articulate his or her own voice and joins with others, together they can become a powerful force for society’s transformation. “We’ve lived through a time in which people have felt they could forge their own future and make a better world. We may not have achieved our dreams in the time frame that we once believed was possible, but the magnitude of what is yet to be achieved only confirms the importance of our continuing commitment. Knowing this, we can’t stop now.”

Please fill out this form to share "Peter Yarrow" via e-mail.