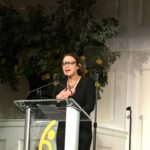 MJLF Rabbi Delphine Horvilleur was chosen by the international foundation Global Hope Coalition  as one of five 2018 “Heroes Against Extremism and Intolerance”.  The award was made by Ronald Lauder, President of the World Jewish Congress, on 28 September, in the presence of heads of state and government present in New York for the United Nations General Assembly.   Delphine Horvilleur was the first rabbi to receive this global award.  Serge and Beate Klarsfeld were honoured in this way when these awards were first granted in 2016.