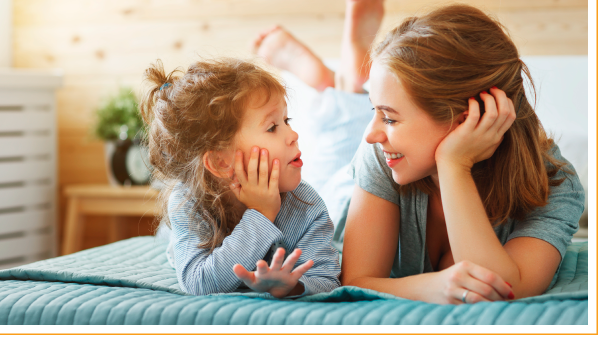 When my son was two and three-years-old, bedtimes were, shall we say, rough. Stories and cuddles were punctuated by wild running or jumping around the room. Getting into bed was a struggle, and once tucked in he would thrash around, unable to settle.

A development specialist suggested a system: “Explain that when he has a calm body and quiet voice, you will continue bedtime routine. If he’s not ready, that’s OK but you will leave the room until he is.”

Our son screamed when we left the room. He sobbed and grabbed at the door handle. I would stand behind the door, broken-hearted, and try dutifully to follow instructions, repeating, “When you are calm and ready, I’ll come back in.”

Needless to say, this did not work. A young child cannot calm himself down from hysterics in isolation. Our son became more reactive around bedtime, and the whole ordeal could last between 75 minutes and two hours. By the time he fell asleep, I was an exhausted mess. I ended most nights beating a couch with my fist or a stick, trying to dispel enough frustration that I could be a half-way decent partner to my husband for the rest of the evening.

Our son had a comfortable bed, plenty of snuggles and stories, a bedtime cup of milk, a dry pull-up. Why was he doing this? What else could he possibly need?

Our Torah portion tells of a man who is also baffled and frustrated by someone else’s behavior. Balaam, a non-Israelite prophet, is asked by his people to curse the Israelites. God warns him against it, but he goes ahead and saddles his donkey for the journey anyway. As they travel, the donkey – unbeknownst to Balaam – sees an Angel of God, blocking the way, sword in hand. The donkey swerves to avoid the Angel, and Balaam beats her. She sees the Angel again in a narrow lane. This time she flattens herself against one of the fences to avoid the Angel, squeezing Balaam’s foot as she does. He beats her again. Finally, the Angel blocks a path entirely, and with no other choice the donkey simply lies down. Balaam is furious. He beats his donkey again – with a stick.

Then a miracle occurs: God opens the donkey’s mouth, and she is able to speak to Balaam.

“Look,” she says, “I’m your donkey, whom you’ve been riding all day. Have I been acting like this until now?” (Numbers 22:30) In other words, do you really think I’m doing this for no reason?

Then God opens Balaam’s eyes. He sees the Angel and understands.

When my son was diagnosed as Autistic, it was as though God had opened the mouth of the donkey. As I dove into learning about Autism, I sought out the voices of Autistic adults, who are speaking out by the thousands about the harm and trauma they suffered at the hands of deeply damaging “therapies” and behavior management tactics used by behavior specialists and caregivers. They are speaking out to change culture and protect Autistic children.

One of the major points I have learned from the Autistic community – a point also advocated by experts in respectful and child-led parenting – is that all behavior is communication.

In other words, the donkey never lies down for no reason.

And our son was not making bedtimes hard for entertainment value. Like Balaam’s donkey, he was pointing the way to something holy, something important that we could not yet see.

Through reading blogs and articles by Autistic people, asking our son himself more questions, and seeking the indispensable guidance of the Facebook Group Autism Inclusivity and our neurodiverse-affirmative Occupational Therapist, we discovered that every difficult behavior at bedtime was a reaction to some unmet need – more exercise, needing to pee, or being thirsty or overtired were the top suspects.

We began to cue all these basic bodily needs multiple times before bed. We got a compression sheet and an adult weighted blanket, which helped him relax while lying down. We went into his room at exactly the same time every night.

Eventually, bedtimes became 45 minutes of delightful and predictable routine. My son got enough sleep. My husband and I got our evenings back. But even more valuable in the long term is that my son learned to respect and communicate the needs of his own body, and to trust that we would respond to those needs. This is integral to the respectful caretaking of any child, but especially Autistic children whose needs are often dismissed as illegitimate.

We had finally stopped beating the donkey. We had opened our eyes to the Angel of God.

In Balaam’s story, God adamantly takes the donkey’s side. “Why have you beaten your donkey three times?” God asks Balaam. “If she had not shied away from me, I would have killed you, while sparing her!” (Numbers 28:33)

In other words, when internalize that all behavior is communication, we not only save the suffering donkey. We also save ourselves.

The shift from “Why is he doing this?!” to “Why is he doing this?” is a sacred one. It shifts us from judgement and blame to compassion and curiosity. It not only helps alleviate the suffering of the misunderstood person or animal in front of us; it also brings us closer to God, able to see and hear truth we could not access before.

As we go forth this week, I invite us all to inquire: Who are the donkeys in my life, whose behavior baffles and frustrates me? How might I shift to a stance of genuine curiosity to better understand them, myself, and the world we share?

Rabbi Shoshana Meira Friedman | Rabbinic Ambassador for Dayenu: A Jewish Call to Climate Action and Director of the Artist Beit Midrash of Hebrew College and JArts

Please fill out this form to share "All Behavior is Communication | Balak" via e-mail.