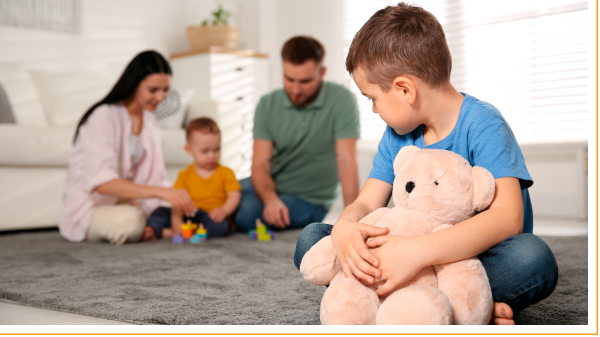 Moses had supportive siblings who stood by him throughout his many challenges. Miriam, his big sister, watched baby Moses in the basket as Pharaoh’s daughter saved him. She then brilliantly offered to find a wet nurse, who was Moses’ own mother. When Moses’ begged God not to send him to Pharaoh, God said his brother Aaron will accompany him to do the talking and be at Moses’ side during the Exodus. However, we see now that this family may not be so different from our own. Moses’ siblings, who were always at his side now in Parashat Baha’alotecha, speak out against their brother. They criticize his second wife, a woman from Ethiopia. Furthermore, they resent God speaking only to Moses; they want to be equals. Miriam had been a leader, a prophetess, and a role model yet she was not included in the ascent of Mount Sinai or in the census of the people. They complain about the special recognition Moses receives and criticize God and their lack of recognition. In short, they are JEALOUS!

Jealousy is a complex emotion that leads not only to personal discomfort but to other transgressions and emotions. As children, we may be jealous of a toy another child has or certain privileges our siblings may have and we do not. Firstborns sometimes say it is not fair that the baby had certain recognitions and attention that they did not. Of course middle children are caught between the two, vying for attention on a regular basis. When we are jealous of a “thing”, sometimes it is not the item itself but the process of procuring it that brings up some of our shadow characteristics – greed, nasty behaviours, hatred, or sabotaging someone. Often, jealousy is not about an item but a position, status, job opportunity, an award and can lead to wanting to deprive another individual of that acknowledgment. If we are solid, we wish that person well. However, being only human, a common response is to feel a sense of unfairness, lack of recognition of ourselves, feeling less favoured, and believing “it’s not fair”.

Moreover, jealousy can lead to competitiveness in order to be “as good as” the other or “better than” in order to achieve recognition. We are certainly all aware of painful hatred from jealousy that comes from such difficulties as inheritances or wanting to keep up with the Joneses. Such jealousy can eat away at us leading to embitterment. We read in Proverbs 30:14 “Jealousy is rottenness of the bones”. On the other hand, if we are aware of our emotions, jealousy can be the trigger for own self work. It can be the impetus for recognition of the need to change our ways or approach to things.  It can even be the trigger that motivates us to work with the “other” in order to make things even better by combining talents and learning from each other.

The notions of competing and collaborating seem intuitively to be polar opposites. After all, how could we possibly work together with someone we consider to be an opponent? Joshua Wolf Shenk wrote about John Lennon and Paul McCartney, the geniuses of the Beatles. The Beatles had a powerful influence on the world, changing not only music but what the world began to hear in music – political stands, social issues, attitudes toward war, hatred, inequality, women’s and children’s rights, and countless concerns barely publicly discussed . John and Paul, both very different, were a brilliant example of how competition can affect people in a positive way. “Co-opetition” is a strategy in business that gives rise to understanding when it is best for competitors to work together –paradoxically. It is about combined competition and cooperation; co-operation to develop new products and competition to obtain market value shares for the new products. They can save money on shared costs yet they compete like cat and dog to sell their product.

The Beatles’ manager George Martin said “imagine two people pulling on a rope, smiling at each other and pulling all the time with all their might. The tension between the two of them made for the bond”. The relationship between them had its struggles with each competing to be the alpha, the top man and the other cunningly “coming in for the kill” to reverse the situation. What resulted was brilliance. As the two competed, together they produced some of their best work. They had ways of feeding off of each other in life as in their music. There can be a fine line between jealousy and competitiveness. Were John and Paul jealous of each other? Yes – each one wanted to be top man. Were they competitive? Absolutely. Remarkably, they needed each other; they thrived on the co-opetition – both the competition and the cooperation.

Jealousy is one of those uncomfortable emotions of our shadow side– our dark side. But feeling jealous also has invaluable lessons for us to explore – it is up to us to question where this feeling is coming from and ask: Will I use my jealousy to do damage to others and myself or can I use this feeling to examine myself to find personal satisfaction and success? Is my success based upon recognition from others or is it based on my own sense of satisfaction and self love? Is it a thing or recognition others have that I am jealous of? Perhaps I can strive for what they have in a positive way. Can I pull on my end of the rope with all my might and still smile at my competitor for the ultimate best outcome? The sibling jealousy we see in Parashat Beha’alotecha invites us each to ask these questions of ourselves.  We also have our moments of jealousy. May our own jealousy and competitiveness be the impetus for our individual self-exploration that compels us each to explore that which invites positive personal growth.

Please fill out this form to share "Jealousy: A Potential Step to Personal Growth | Beha’alotcha" via e-mail.