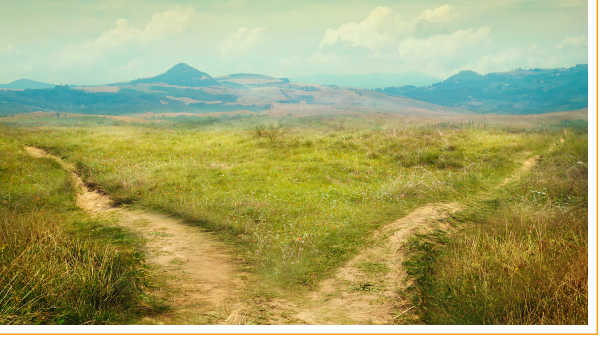 Years ago, at a community gathering in my small East Texas town, I presented a prayer. One of the lines in my text read, “from our different faith communities, we all walk on different paths, but toward the same goal – a world filled with holiness – a world primed for redemption.”

I liked the message and felt that it was appropriate for this multi-faith gathering. But a minister pulled me aside after and chided me on that line. He said that in his religious worldview, we may be on different paths, but indeed, we were not all heading the same direction. Of course, he was promoting his personal belief that his religious path was the only correct one. I responded with a smile and said, “I guess you came to the wrong event today.”

I think about that exchange from time to time. Not only for that minister’s unfortunate view, but also for recognizing why I felt so comfortable with my assessment. Why, as a Jew, was I at ease with the concept of multiple paths? Why am I not offended when others chose a different path?

It is because we have a tradition that celebrates pluralism.

In this week’s Torah portion, Beshalach, God instructs Moses to part the waters of the Reed Sea. In the well-known text from Exodus 14:16:

And you lift up your rod and hold out your arm over the sea and split it, so that the Israelites may march into the sea on dry ground.

Generations of people have told and retold this story. It’s one of the most iconic passages in the Torah and it caught the attention of many rabbis over the centuries. Some of them focused on the actual imagery of the moment.

One of my favorite texts describing this event comes from a collection of midrash called Pirkei DeRabbi Eliezer. In 42:5, it says:

What an amazing vision!

When we think of the parting of the waters, quite often we are drawn to artistic versions or cinematic portrayals. We always see the waters split into two – a pillar of water on the left, and one on the right – with the Israelites marching between.

But here, Rabbi Eliezer imagined it differently. He suggested that the physical walls of water were actually separated into multiple, freestanding walls of water (eleven if you want to do the math). And each of the twelve tribes took a different corridor in their escape from Egypt. The Levites and the Danites and the Asherites (and all the rest) were in their own walkways between the waters. And I love that idea that they could see one another through walls of water. And they marched forward, separate yet together, until they reconvened on the other side with a song of joy. Mi Chamocha!

Thank you, Rabbi Eliezer, for this wonderful lesson about multiple paths and a shared destination!

And so, I return to my interaction with my minister friend who suggested only he had the only correct path. That is not what our traditions teaches. Instead, we are taught that there are multiple paths toward holiness. And that is okay.

And so when I drive through my community and I see the multiples churches, mosques, temples, and fellowship centers, I do not have a competitive urge to discount other faith traditions. I cheer them on as we all march toward redemption.

For me, this also applies within the Jewish community. We are small family religion, dispersed throughout the world, splintered into a variety of denominations. And just like our tribal ancestors, in the vision of Rabbi Eliezer, we are marching forward, together, yet separate. But we are all drawn to the same goal – a world made holier through commitment to Torah, Israel, and each other.