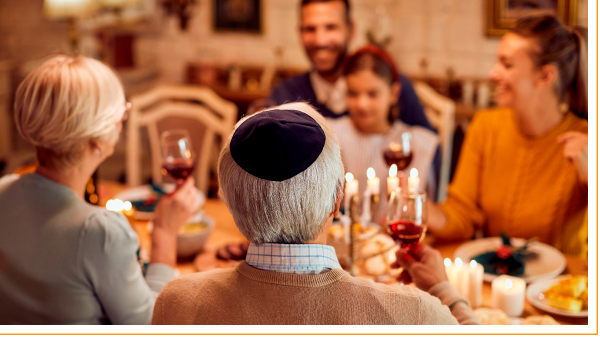 At this holiday season, we are all eager, maybe more than ever before, to be able to gather with our loved ones. After an extended and ongoing world heath crisis, during which many of us have had to forgo family and other gatherings, we are desperate to reconnect and celebrate our times of light and joy together. It is almost always that case that we read Parshat Mikketz (Genesis 41:1-44:17) during the festival of Hanukkah, as is the case this year. How ironic that at a season of family get-togethers, we read of one of our earliest Jewish families and their dysfunctional relationships. (Of course, some of those relationships which achieve reconciliation in the portions we will read in the weeks ahead.)

In our portion this Shabbat, Joseph has become an important and powerful figure in Egypt. Facing famine back in their homeland in Goshen, his brothers have come to Egypt, seeking food to support the family back home. In Genesis chapter 42, we read of the brothers approaching the powerful Egyptian figure before them seeking rations. Joseph recognizes his siblings, but they fail to recognize that the authority figure before them is none other than the brother they sold into slavery years earlier.

In his classic Mussar work, Shiurei Da’at, Rabbi Yosef Yehudah Leib Bloch, leader of the Telshe Yeshivah, notes that there is much we can learn from the behavior of Joseph towards his brothers. “Even though they had sinned against him, and their sins were heinous,” Rav Bloch suggests that “it should have been possible for Joseph to practice the middah (soul-trait) of ma’avir al middotav, forbearance, towards his family members without punishing them and increasing their suffering and troubles through his behavior towards them.” (Shiurei Da’at, part 2, lesson 11)

Some of us can no doubt relate to Joseph’s resentment and bitterness for the ills he faced at the hands of his brothers. We live in complicated times, What Rav Bloch calls ag’mat nefesh – distress (literally “grief of the soul) is widespread in our times of bitter division, with what I would call “aggravated ag’mat nefesh.” Following Rav Bloch’s teaching, I believe it behooves us, within our closest relationships, as well as within our communities and broader social contexts, to learn from Joseph’s behavior with his brothers.

In the Talmud (Rosh HaShana 17a) we learn, “Rava said: ‘Whoever is ma’avir (literally, to pass over) on his middot, [God] will be ma’avir on their sins. The French medieval commentator Rashi explains, “To be a ‘ma’avir on middot” means that one does not calculate the exact measure [of retribution] that those who cause them pain truly deserve. Rather such a person ‘leaves’ stops “keeping score” and [drops the matter] without exacting revenge. And Rava’s teaching suggests that when we do so with regard to one another, in turn God will “pass over our sins,” suspending judgment and relinquishing the right to punish us for our misdeeds.” Put simply, to be ma’avir al middot is to forbear offense, and let it go. This Is not always easy.

Commenting on this concept, the great Mussar master, Rav Shlomo Wolbe taught, “Our Sages reveal that the judgment we will face [from the One Above] depends on our actions. God deals with our judgment in the same manner in which we deal with others. If we are ma’avir on our middot, if we do not act strictly with others who cause us pain, then God in turn will not be strict in judging us. (Alei Shur II:430-1)

For Rav Bloch, Joseph is our model. Had he welcomed his brothers from the first, and worked to re-establish a relationship, he would have been a ma’avir al middotav. Of course, we know that Joseph was trying to ascertain three things: (1) is his younger brother Benjamin okay; (2) is their father okay; and (3) do his brothers feel any sense of remorse. Those matters are resolved in next week’s portion.

In our day, we are polarized, and tribalized. Civil discourse is, in too many arenas, simply impossible. With the myriad problems we face as human beings, as Jews, and in the countries in which we reside, we are confronted by monumental challenges: the ongoing COVID-19 pandemic; challenges brought on by climate and environmental change; bitter hostilities in too many corners of our globe; anti-Semitism, racism and other forms of hatred on the rise; economic disparity; and so much more. Rather than further dividing ourselves against one another and continuing to play zero-sum games in which we seek to win, while others lose, we should reflect with Joseph and his brothers as our backdrop on how we might reach across the divides that separate us. Ultimately, if we cannot practice forbearance, address the challenges before us, and heal the hurts we may have caused one another, we will drive the wedges even deeper.

Rabbi Hayyim of Tzanz, an early Hasidic master would tell the story:

A man lost his way in the deep of the forest. Some time later, another person also lost their way and met the first. Without knowing the plight of the first, they asked the other the way out of the forest. “I do not know” answered the man, “but I can point out to you the paths leading further into the forest, and then we can walk together to look for the path leading out.” Rabbi Hayyim would add, we must search out the new path together.

Though he may not have used the words, practice the middah of forbearance, clearly that is the path we must seek as we move through our Festival of Lights, and on towards a new secular year in which we surely hope to meet our challenges and heal our relationships and our world.

Please fill out this form to share "The Forbearance We Need As We Reconnect | Parashat Miketz" via e-mail.