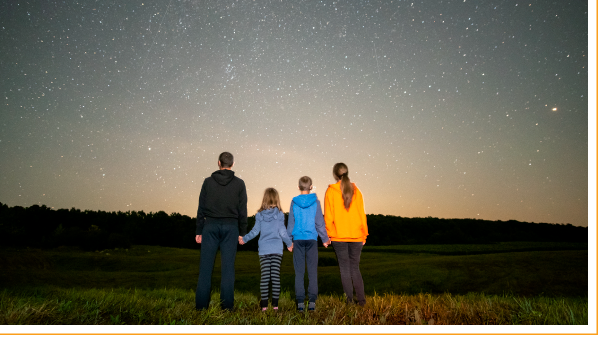 Every year at Thanksgiving, my sister-in-law’s father organizes what we call a gratitude circle. There is no talking in the circle, only listening, to the quiet autumn breeze, the sweet birdsong, or the still small voice within. He insists upon the circle that we might break free from the noise and commotion of the day. Still, it’s never easy herding the masses outside, tearing them away from their turkey and football, shooing them out the front door. But once we make it to the yard, and once we manage to form a shape that passes for round, we all take a collective breath. It’s good to be here.

Our lives are so busy. There is little time in our often-relentless schedules for such things as gratitude circles. Living in overdrive, we are always running and rushing. It is utterly exhausting, but at the same time, unimaginably difficult to stop. That is why, for some, the early Covid quarantines came with a silver lining: a forced pause from this endless stream of activity, a break from the madness, so to speak. This deadly virus, which obligated us all to remain home, ironically provided a respite from the feverish pace so many had come to consider normal. But nothing about this intense pace is normal.

Truth be told, in countless ways, we’ve lost our understanding of time. We don’t know where it goes, or how to find it. We are bewildered by its passing; thus, we find ourselves in its constant pursuit. As a medieval poet once wrote, “Time is our companion but only briefly. It flies faster than the shades of evening. We are like a child trying to capture a moonbeam. We open our hand, and it is empty, and the brightness is gone.”1 Indeed, we spend much of our lives chasing after time, trying to harness it, save it, stretch it. We never seem to have enough, and the deficit only grows.

We often compensate for this lack of time with an increase in speed. The thought being, if we rush through the day, maybe we’ll end up with a few extra moments in the evening. But rushing doesn’t add to the quality of our lives; on the contrary, it only takes away. We become slaves to the clock, living in a world where every minute is micromanaged, evaluated for its efficiency and productivity, or lack thereof. And every moment, having lost its dignity in the service of this rapid-fire existence, only serves to propel us to the next. “People are born and married, and live and die, in the midst of an uproar so frantic that you would think they would go mad of it,” wrote novelist W.D. Howells.2 What would it mean to push pause on this “frantic uproar?”

We see one such attempt in the very first verse of this week’s Torah portion, Vayeshev. “Vayeshev Yaakov b’eretz megurei aviv,” and “Jacob settled in the land where his father had sojourned.”3 Jacob comes to the land of his forefathers in an attempt to, as Avivah Zornberg writes, “to settle his life, to find some measure of tranquility after all his troubles.”4 After decades of turbulence and turmoil with his family, and years of near-constant motion, Jacob wants nothing more than to quiet his life and set down roots in his ancestral home. He is through with leading such an emotionally charged existence, and he is done with the wrestling and wandering that had defined his journey thus far. Jacob wants peace. He wants stillness. But most of all, Jacob wants to live a life more grounded than the one he has known, and more steady.

We who live our lives in constant motion would do well to follow Jacob’s impulse to slow down and settle, that we might acknowledge where we are, who we are with, and why we are here, instead of using the present as a mere reference point for the future. What happens in the “now” matters and what happens in the “now” deserves our attention and presence. Sailing through the frenzied channels of life, we don’t often see the now; we merely pass it by, on the way to something else.

It is said that Rabbi Mendel of Kotzk once asked the disciple of another rabbi who had recently died: “What was most important to your teacher?”

The disciple considered the question and then replied: “Whatever he happened to be doing at the moment.”5

As we gather for Thanksgiving, Shabbat, and beyond, may these words of wisdom gird us against the tide of feverish freneticism which so often overtakes our lives. Whether we commit to making Thanksgiving gratitude circles or slowing down our hurried pace, let us find meaning in the pause. For the world will not decelerate on its own, or simply because we will it so. As Jacob, the man who wanted nothing more than to settle down, knew all too well, life will always be convulsive and unpredictable. We can’t change that. But we can change the way we move along life’s path, making our steps more deliberate, our turns more intentional, even taking stops along the way, to catch our breath, to look around, and to listen, to the holy sounds all around us and to the Holy Voice within.