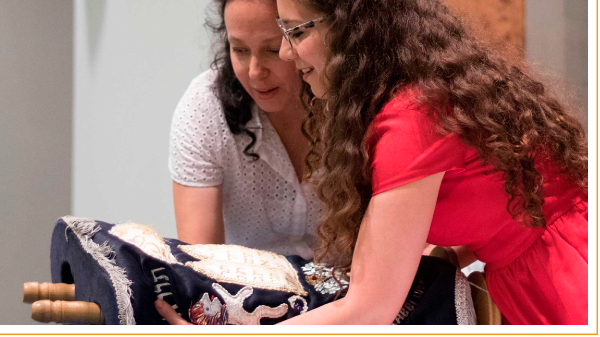 I have always thought that this Shabbat’s Parasha, Va’Yishlach, requires more than a single week of study, discussion and then more study.

Just the single passage, Genesis 32:23-33 is the profound narrative about Jacob’s final experience of maturation, a mythic battle in which he is transformed. It is the night before meeting his brother, Esau, from whom he stole his dying blind father’s blessing, and when Jacob is alone, he inexplicably ‘wrestles’ with a ‘divine being’. This experience is the source of his new name, Israel, “…for you have striven with beings divine and human, and prevailed.”(Gen. 32:29b) Scholars refer to such narratives as etiologies, explanations of origins. This is how our biblical community became the Israelites.

The Book of Genesis is about the nomadic clan, the Hebrews, the family whose relationship is with the One God, but their story ends when Jacob becomes Israel. In the opening verse of Exodus, is the first time that Israel is used specifically as the patriarch’s name, “These are the names of the sons of Israel….” But then the sons become a nation, Bnei Israel, the people of Israel. (Exodus 1:7). Today, there are no Hebrews nor Israelites, these names refer to biblical communities.

This name change offers an important lesson for 21st century Reform Jews throughout the World Union of Progressive Judaism. The biblical text teaches that Jacob was prepared to struggle with his past, and then was willing to take the risks of transformative change, both of which are defining characteristics of Reform Judaism since its inception in Germany. Our movement’s commitment to gender equality permanently transformed the rabbinate and cantorate of all non-Orthodox movements. Our public and communal struggle with Jewish tradition’s exclusion of the LGBTQ community, continues to influence the entire Jewish community. Our continual creative engagement with our Siddur, Mahzor and Haggadah has stimulated a library of new liturgies.

Regardless of our commitments to dynamic change, the data from the most recent Jewish population surveys suggests that Jews when asked about affiliation, are choosing: ‘None of the above’, the category with the greatest increase: unaffiliated. Do we need to do a better job of ‘branding’, communicating with greater passion what our name-Reform-means today? Many congregations’ names do not indicate which ‘brand’ of Judaism and Jewish values are lived and taught; Temple Israel, Beth Sholom, Anshe Tzedek, and Emanuel do not guide today’s Jewish generations what to expect.

Here in Brazil, most of the congregations are known by acronyms: ARI, CIM, CIP, SIBRA, SIC, AIC, AINP. They are Associations from various state or city locations , but all linked by the term: Israelita, the Portuguese word for Israelite which comes from our Torah portion. There are only speculations about the use of this biblical idiom, it is argued that the use of this term, 90 years ago was safer than using Jew or Jewish during a time of global antisemitism. The oldest Brazilian Reform congregation is Sociedade Israelita Brasileria de Cultura e Beneficencia, SIBRA, founded in 1936 by German Jews. The two largest congregations, CIP( Sao Paulo) and ARI (Rio de Janeiro) were founded by German refugee rabbis brought to Brazil by the WUPJ’s then President, Lady Lilly Montagau. Most Jews in Brazil, as in most 21st century communities, are unaffiliated, some send their children to Jewish day schools and the Zionist youth groups are very strong. But there are no congregations that specifically use our ‘brand’ names: Reform or Progressive to distinguish and emphasize what we offer the Jewish community. The time has come to teach the communities in which we have congregations what Reform Judaism provides them for their Jewish survival.  This week’s Torah portion still teaches us about our defining principles: that our struggle with the past and then taking the risks of transformative change is how we became Israel, a community with a destiny of freedom and hope.

Gender, orientation, and liturgical change are still historical characteristics that Reform Judaism affirms in each generation, but we need a transformative message for our 21st century ‘brand’. The recent Jewish population surveys suggest that the public communal emphasis for Reform Judaism should be the new Jewish family reality. Our congregations in Brazil must passionately celebrate that we embrace and unconditionally accept every family that wants to join, wants their children educated and wants to share in the life cycle Mitzvot of Jewish life. Let us stop using terms like ‘inter-faith’ or mixed-married and consider every family that seeks to join our community: regardless of single or two parents, no matter the issue of orientation and certainly regardless of which parent is traditionally defined as a Jew, each of these families, all of these families represent the future of Jewish life. Let us boldly, even defiantly, add Reform to our congregations’ names, our websites and Facebook pages; now is the time for our congregations to educate the public about our values and what the term Reform will mean to the dynamic growth of Jewish life.

Our Torah portion describes Jacob’s inner struggle prior to engaging Esau who is the first born, but who embittered his parents when he married Hittite women. Gen 26:34 and  Gen 27:46 both describe the first example of a family conflict created by marrying outside the community; the text notes, “Rebekah said to Isaac, I am disgusted with my life because of the Hittite women.” (27:46) After which Jacob is sent to Paddan-Aram to find an acceptable wife. Every rabbi of our time has met and counseled parents who are as disappointed as Isaac and Rebekah. Just as Jacob’s personal struggle stimulated the transformative risk of becoming Israel, so now we must publicize and celebrate that we are a sacred community prepared for what this generation needs. As the dawn ended Jacob’s battle, his new name initiated the destiny of a community, that still repairs the world. Let us in the WUPJ, be the Jacob who woke up as Israel, so we can bring tomorrow’s Reform Judaism to the Jews and Jewish families who do not yet know our songs of hope and values of redemption.

Please fill out this form to share "Reform Judaism: a Movement worth the Struggle | Parashat Vayishlach" via e-mail.