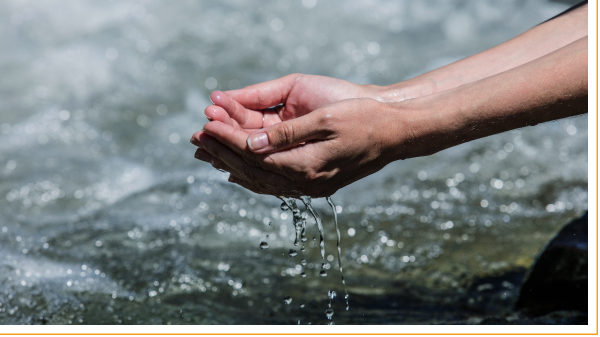 What we choose to fight is so tiny! What fights us is so great!
When we win its with small things, and the triumph makes us small.
What is extraordinary and eternal does not want to be bent by us.

Water and wells enter into the imagination of the rabbis as metaphors for spiritual sustenance, love, peace, and as a way to tap into the wellspring of God. In his commentary on Genesis 1:1, Rashi teaches that God created the waters before heaven and earth. These amniotic waters swirl within the depth of precreation where God’s spirit hovers. Then, as the creation story continues, there is a split between heaven and earth: God made the expanse, and it separated the water which was below the expanse from the water which was above the expanse. And it was so. God called the expanse Sky (Genesis 1: 7-8). Before the clouds, before the rain, before the storms, there are the waters of the heavens above and the waters of the earth below — a flow (that) would well up from the ground and water the whole surface of the earth. So fundamental are the mystical waters that the verse begins: Such is the story of heaven and earth when they were created (Genesis 2:4).

The human being is also created with the human spirit. Like the waters of creation, we exist in two worlds. We walk upon the earth, living an embodied life, physical, temporal, and often ordinary and mundane. And the human spirit, like the waters above, yearn and aspire for meaning, for a sense of purpose. We live in the between, with our feet solidly walking upon the earth and our spirit reaching for the transcendent and sacred.

Rebecca’s well and the wells that Isaac digs are at once life sustaining and spiritually instructive. They offer lifesaving water and they are symbolic, mystical, and metaphoric.

Abraham is promised that through him we will become a great and prosperous nation, as vast as the stars that light up the heavens in the dark of night and as numerous as the sands as far as the eye could see. But the covenant could only continue through marriage and offspring. So, as we read last week in Hayyei Sarah, Abraham sends his servant to search for a wife for Isaac among the tribe.

The servant ran toward her and said, “Please, let me sip a little water from your jar.” “Drink, my lord,” she said, and she quickly lowered her jar upon her hand and let him drink (Genesis 24:17-18).

The man bowed low in homage to God and said, “Blessed be God, the God of my master Abraham, who has not withheld His steadfast faithfulness from my master. For I have been guided on my errand by God, to the house of my master’s kinsmen” (Genesis 24:26-27).

Abraham’s servant is guided by the transcendent and eternal spirit of God to Rebecca’s well, and he immediately recognizes her as the woman that will become the next matriarch, hence fulfilling God’s promise. Radiant, regal, and generous, Rebecca draws from the well, offering water to the servant and the camels. This moment of recognition on one hand and graciousness on the other turns the encounter at Rebecca’s Well into a symbol of steadfast love between God and the people. Heaven and earth meet.

Meanwhile, Isaac is told by God that despite the famine in the land, Isaac was not to leave the land, not even for food and water. So, Isaac set out to find the wellspring that could sustain this young nation during the drought. He went to the place where his father Abraham had dug. Abraham, after a dispute with the Philistine king, Abimelech, had forged a treaty securing the wells for Abraham and Sarah to sustain their wandering tribe. The place was named Be’er Sheva, which means The Well of the Oath. But the treaty was broken after Abraham’s death, and the wells were closed. Isaac had to begin anew (Genesis 26).

Isaac digs the wells of Toldot in Nachal Gerar. The word gerar means to drag. As the flood waters come in from the mountains and fill the valley, stones are loosened and dragged, forming the aquifer which is the source of the well water. With a literary sleight of hand, the name of the place where Abraham dug his wells shifts in meaning. The root of the word sheva can mean oath, but it can also mean seven. The name of the city, Be’er Sheva, changes its meaning from the Well of Oath to The Well of Seven, as Isaac begins to dig seven wells. Isaac tries to find sustaining waters and instead digs wells that are named “contention and strife,” for he is dragged into a fight with the shepherds of Gerar. With this delicate linguistic change, we are taught that where there are contention and strife, there is no blessing. As long as Isaac and the shepherds of Gerar are engaged in conflict, the promised blessing is not realized.

How often do we immerse ourselves in struggle? We focus on right and wrong, determined to win and not lose, convinced of the truth of our position. Our focus becomes our reality. When we drink from the well of strife, we become stricken, afraid, defensive, and find ourselves in a spiritual state of constriction. The space between earth and our aspiration to ascend to the Highest Good becomes narrow, as if our spirit is bent over and clenched from the conflict — and we become small.

Acknowledging the metaphoric and spiritual power of these wells, the rabbis have a dream, a midnight vision swirling in the dark and shadows that took form and revealed a divine truth. Rabbi Hanina said: One who sees a well in a dream sees peace, as it is said: “And Isaac’s servants dug in the valley and found there a well of living water” (Genesis 26:19) and ultimately there was peace (BT Berachot 56b). Isaac finds the way. As taught by his father, he strikes a treaty and the strife ceases. Isaac then digs the third well, which he names Rehovot, meaning expansiveness. Once the well of expansiveness is dug, the fear is taken away and replaced by the blessing:

From there, he went up to Be’er Sheva. God appeared to him that night and said, “I am the God of your father Abraham. Fear not, for I am with you. I will bless you and make your descendants numerous, for the sake of My servant Abraham.”

If we are to struggle, let it not be driven by fear and scarcity. Instead, let us struggle to live in the between, that expansive place where earth meets heaven and the abundant flow of the waters above touch the wellspring of the waters below. Then shall we draw from the well of graciousness, blessing, and steadfast love.

As it written: With You is the fountain of life, by Your light we see light (Psalm 36:10).

Please fill out this form to share "The Wellspring of Heaven and Earth | Parashat Toldot" via e-mail.