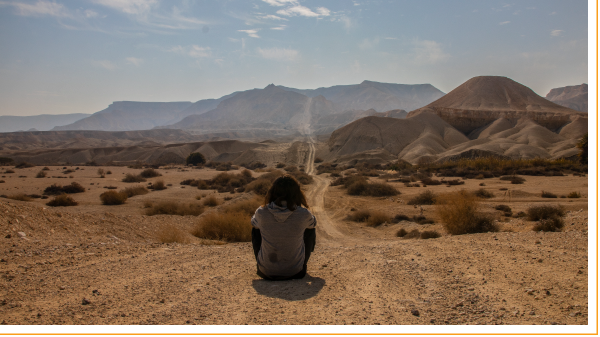 VaYelech is the third from last portions of the Torah. It describes the farewell of Moshe from the people of Israel and brings his last speech to his people. Following this last touching chapter is only the great poetry of Ha’azinu.

VaYelech is read either before Rosh Hashana or in the Shabbat between Rosh Hashana and Yom Kippur. Thus, it is always adjacent to Yamim Noraim– the Days of Awe.

I recently took part at a CCAR webinar on the challenges of speaking in North American High Holiday services about Israel. In the past decade, talking about Israel has become controversial and political. The subject of Israel (referring mostly to decisions of the Israeli government and actions of its army) touch on deep disagreements and extremely sensitive points for liberal Jews in North America as well as in Europe, and really, all over the world.

When reading the opening verses of VaYelech this summer, I couldn’t refrain from seeing it afresh, from a liberal, VERY liberal diaspora Jewish point of view. Here are the third and fourth verses of the Portion:

Adonai your God Himself will cross over before you; and He Himself will wipe out those nations from your path and you shall dispossess them. Joshua is the one who shall cross before you, as the Adonai has spoken.

Adonai will do to them as He did to Sihon and Og, kings of the Amorites, and to their countries, when He wiped them out.

The Torah is blatantly violent and unapologetically colonialist here. Our G-d promises to endow the land He has chosen for us in a manner of complete elimination of its current inhabitants. To make the point clear, the prophecy refers to the absolute defeat and destruction that befell the two nations which refused to let the Israelites cross through their lands in the journey from the dessert to Canaan.

What on earth do my diaspora colleagues do with a kid whose Bar/Bat Mitzvah is this week? How do they explain these commands- to wipe out whole peoples in Canaan and to repeat earlier slaughters as if this is the only way to achieve a nation’s goals?

Wondering what our predecessors thought about this issue I checked the 17 interpretations Sefaria brings to verse 3 of chapter 31. I hoped to find moral and religious interpretations of the promise to “wipe out those nations from your path”.  Apparently, none of the giants before us was troubled by our modern-day concerns. Could it be that living in diaspora, the moral implications of demolishing and extinction of civilian population did not bother the Rishonim as well as the Achronim? Were ethical consequences of abusing military might in the process of conquering new land simply not relevant for their lives?

Admittedly, there are other Parshiot and Verses which are challenging for contemporary readers. An example is G-d’s hardening of Pharos’s heart to justify the inflicting of more plagues on the poor Egyptians. This example presents serious moral doubts, but its challenge is not different for Israeli rabbis than for our diaspora colleagues.

The issue of military aggressions and religious intolerance has a particularly difficult resonance today. It hits very close to current -unjust- allegations against the state of Israel as being a colonial racist entity. While there are some Jews who read these verses and are empowered in their militant and nationalist politics, for liberal Jews everywhere this is very difficult.

To be sure, Israeli progressive Jews are also uncomfortable with this attitude of the Torah here. But we may be more used to balance the pros and cons of living in a Jewish State. While we know very well that Israel is far from being ideal, it is still our daily reality and we do enjoy the benefit of being a majority. We do not face the constant criticism and hardly concealed antisemitism, that is often a part of diaspora existence.

So, what to do with our Parasha?

Perhaps we can use VaYelech as an opportunity to raise some fundamental questions:

I personally prefer to deal with moral dilemmas head on. Spiritual interpretations that suggest we talk about the inner struggle between “Yetzer HaRa” (our evil desires and instincts) and the “promised land” of eternal inner peace is not interesting enough. I am ready to face what we now understand as an unnecessary cruelty in our history- when we were on the powerful side, thanks to G-d’s support. Discussing the difficulty in finding this in our holy Torah allows us to face the wrongs we are now responsible for. I do expect the Jewish State to be more moral than others because this is what the same Torah demands of us!  Such conversation is ever more appropriate between Rosh HaShanna and Yom Kippur.

Are rabbis today free to talk about these matters from the pulpit? I am afraid very few of us will not avoid such politically loaded topics. In this regard there is no difference between diaspora and Israeli rabbis.

Our sacred texts offer different and sometimes conflicting teachings. A wonderful source to end this short discussion is in Psalms 34:

Who is the person who is eager for life, who desires years of good fortune?

Guard your tongue from evil, your lips from deceitful speech.

Shun evil and do good, seek peace, and pursue it.

May this advice be our shining light.

Please fill out this form to share "What do we do with the script of wiping out the nations from our path? | Parashat Vayelech" via e-mail.