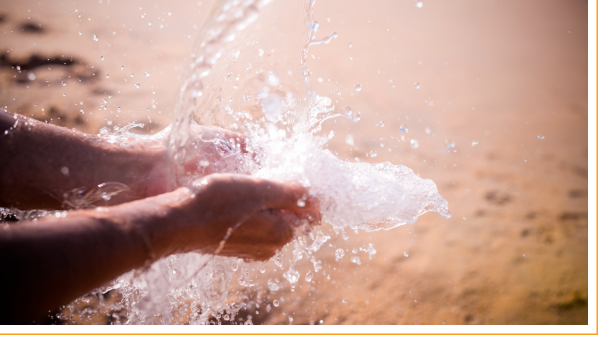 Miriam died there and she was buried there.
There was no water for the congregation. (Numbers 20:1-2)

When we have a simple reading of these two verses we might conclude that there is no direct connection between the two events. Miriam, the sister who saved Moses months after birth and who played an important leadership role during Israel’s travels, died and was buried. Immediately after we are told that there was no water to the congregation, and they rebelled against Moses and Aaron. This led to the miracle of drawing water from the rock but also to the subsequent harsh punishment of Moses who hit the rock rather than speaking to it.

One important Jewish interpretive device is the idea of סמיכות – s’michut. If there are two passages that do not seem to be connected, but appear next to one another then this might not be coincidence. There could be a connection between Miriam’s death and the lack of water. The Talmud (Taanit 9a)

Three miraculous gifts were given to Israel in the desert: The well of water, the pillar of cloud, and the manna… The well was available to Israel due to Miriam’s merit. When Miriam died the well disappeared, as it is stated: “Miriam died there”, and it says immediately after: “There was no water for the congregation”.

Miriam’s well is also listed in the Mishnah (Avot 5:6) among the ten miraculous items, created at twilight on the Sixth Day of Creation.

This miraculous well did not just issue water, it also followed Miriam and therefore wandered in the wilderness together with the congregation. When Miriam departed, the miracle stopped and the well departed with her.

Rashi, in his commentary on the Talmud (Taanit 9a) makes further connection between the rock Moses hit in an attempt to draw water and Miriam’s well. He claims that this was the rock containing Miriam’s well. It rolled after the People Israel in the desert, and it refused provide water after Miriam’s death.

Water is the most important substance for all life on Earth. It is also an important element in Judaism. Crossing a large body of water is a transformative step. Jacob encounters the angel of God at the Jabok cross of the Jordan River. This experience transformed him form the crooked Jacob to the one struggling with God – Israel. When his descendants, the People Israel cross the sea of Reeds, they were transformed from Egyptian slaves into free tribes of nomads. Forty years later, when they crossed the river Jordan, they were transformed yet again from nomads to a nation of warriors.

Water purifies. There is a long tradition in Judaism of Immersion in the mikveh for women and men. Immersion is the final stage in the process of conversion into Judaism. It is the process of emergence from a spiritual womb. There is a tradition of netilat yadayim the washing of hands before eating a substantial meal, and after visiting a cemetery.

One of the rituals of Rosh Hashanah is the Tashlich, the symbolic casting away of our sins into the water.

Over the generations many Jewish commentators tried to locate Miriam’s well. Some claim that the well continued to travel with Israel in the desert and into the Promised Land, until it found its resting place in an unknown location somewhere in Sea of Galilee. Its healing powers are saved for the lucky sick people who happen to come across it.

Moses Isserles, in his commentary on the Shulchan Aruch (Orach Chayom 299:10), describes a custom of drawing water from any well or natural spring every Saturday night when Shabbat departs, because this is the time Miriam’s well passes through all natural sources of water.

I believe there is at least one place where water from Miriam’s well is to be found. It is Miriam’s cup at the Passover Seder table in many of our homes. It is filled in recognition of Miriam’s and all other women’s often forgotten and sidelined contribution to Judaism and Jewish life. Perhaps it is time to add Miriam’s cup to every Havdallah service at the conclusion of Shabbat, as a more frequent reminder of Miriam’s contribution, and the significant contribution of the feminine half of the Jewish people.