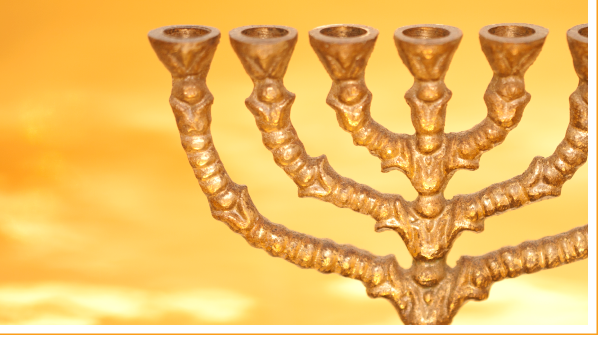 While modern readers associate Exod. 27:20-21 with the eternal lamp (ner tamid), when the sixth century CE poet Yannai set out to compose a liturgical poem (piyyut) for the week when the parashah began with these verses, he drew his inspiration from a different lamp: the seven-branched lampstand (menorah) that would become an emblem of the Temple and, to many, of Judaism as a whole. Menorahs appear in early synagogue mosaics, on Hasmonean coins, and as graffiti; they decorated a range of personal items, from glass wine bottles and bowls to clay lamps and sarcophagi; and it is the menorah that Roman soldiers carry away as a symbol of their triumph over Judea on the Arch of Titus.[1]

This week’s Torah portion, which speaks to the need for procuring pure oil of beaten olives for the kindling of lamps in the sanctuary, inspired Yannai to ponder the meaning of the menorah. Given that we have evidence of the use of menorahs in early synagogues, Yannai’s decision to focus on the seven-branched lamp was not a purely imaginative exercise; he was drawing his congregants’ eyes toward an object before their eyes, which connected them to the commandments God gave to Moses, and Moses conveyed to the Israelites, and which was still operative in their present moment.[2] He saw in it nothing less than a symbol of the Jewish people and Jews’ sacred and ethical truths. What he beholds is a vision of beauty and power undimmed.

Each Shabbat, Yannai presented his congregation with a novel, poetic version of the opening of the Amidah: his compositions, called qedushta’ot, interweave the language of the Torah portion with the first three blessings of the Amidah—culminating in the recitation of the qedushah, and thus the name.[3] These compositions were quite lengthy—nine poems distinct units that, combined, run 150 lines or so—but I wish to highlight several lines from a unit at the center of the composition (Unit Six). Of all the sections of a classical qedushta, the sixth unit is usually the most expository—the clearest in terms of its textual interpretation.

Yannai’s qedushta’ot typically focus on the first few verses of a parashah, so it is natural that his composition for Exod. 27:20-21, and thus the routinely kindled lamp. Key to his vision are both the item—the lamp itself, and its construction—and the act of kindling.  With regard to the lamp’s structure, Yannai focuses on the way that the seven branches function as a single lamp. The individual lights work in concert toward a shared purpose. The poet then draws an analogy between the way the lamp is a single item made of many parts, and the work of the priesthood—many individuals engaged in a singular mission—and finally, the people as a whole. Lamp, priesthood, and people can be appreciated for their diversity, but for the lamp to cast its glow and fulfill its purpose, all the components must work together, harmoniously.

The poet plays with this network of metaphors in ways that suggest the collective radiance, reciprocity, and potency of peoplehood. The poet describes the people as commanded to work together, just as the priests in the Temple and the individual lamps of the menorah did. It is a vision in which God commands individuals to nurture each other’s brightness and tend each other’s flames. The flickering lamps on the menorah provide the poet with a metaphor for collective identity and communal action but in a fashion which does not erase the individual. The sum greater than the total of the parts, but the individual elements still matter: “The multitudes of the nations become a single nationality, / an arrangement of lamps coming together in a single fixture.” The poet imagines the people as a harmonious whole, connected like the branches of a lampstand to a single root, a single purpose. It is an image of beauty and functionality imbued with ethical significance.

This poem consists of twenty-two lines and embeds a complete alphabetical acrostic from alef to tav. Every pair of lines is a unit, sharing an end-rhyme; the phrase, “And as for you, you shall command…” introduces every stanza, functioning as a kind of refrain. Here I present the ten lines of the poem that speak most directly to the theme of communal cooperation and identity:

(א) The faithful of the nation, “Who is this who ascends?” / to light a lamp, a flame ascending of its own accord
(ב) When extinguished—if the light is goes out— / one may rekindle it from the altar of the burnt offering

(ה) The multitudes of the nations to become a single nationality, / an arrangement of lamps coming together in a single fixture
(ו) And all of them adhere to a single law / both on days of routine and days of rest…

(כ) All the priests shall attend to a lamp, one at a time, / and all the lamps comprise a single light
(ל) Not one will cast a shadow upon another / and they will be as good as the light that was created on the first day

(מ) The exalted ones, whom I exalted on high / to offer up pure (oil), exquisite first-pressing, none preceding it
(נ) The radiance of the splendid menorah / divine flames[6] rising higher and higher…

[1] For a study devoted to the many appearances of the menorah, see Steven Fine, The Menorah: From the Bible to Modern Israel (Cambridge, MA: Harvard University Press, 2016).  It is important to note that the ner tamid as conventionally understood today—as a continually lit lamp suspended above the Torah ark—represents a post-biblical invention; see Lee I. Levine, The Ancient Synagogue: The First Thousand Years, 2nd ed. (New Haven: Yale University Press, 2005), 356-360.

[2] In addition to archaeological evidence of menorahs, statements in rabbinic writings assume that such items could be donated by Jews and non-Jews to synagogues, and that such lamps were not “ordinary” lighting.  See t. Megillah 2, 14. which states, “[If one] makes a lampstand (menorah) and a lamp (ner) for the synagogue, as long as the name of the owner or donor is not forgotten, one cannot use them for another purpose; when the name of the donor has been forgotten, one can use them for another purpose.”  See also y. Megillah 3, 2 (74a) and b. Arakhin 6b.

Please fill out this form to share "From Many, One | Parashat Tetzave" via e-mail.