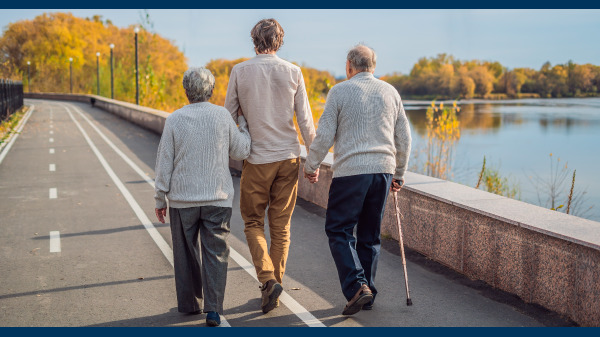 His glory had faded. Widowed, exiled, Jacob made his home in a foreign land. He had grown old and sick, and the day of his death was near.

Concerned over his father’s terminal condition, Joseph went with his two little boys to see their grandfather. As they stood by his sickbed, Jacob, now blinded by age, asked Joseph who had accompanied him. Joseph answered, “My two sons.” Jacob kissed the two boys and embraced them. He was bidding them a last good-bye.

The imagery and emotional impact of this narrative is overwhelming. This Jacob who had given up all hope of ever seeing his son Joseph, was now embracing his son’s sons. Though widowed and exiled, Jacob was to die a happy and fulfilled man. What more could anyone ask for than to die in the company of loved ones?

This week’s parasha illustrates a paradigm of human excellence at the time of illness and death. Joseph gave his father the most precious gift he could. He did not allow his father to die alone. When Joseph took his two sons to see Jacob, he realized that no other influence is as successful in brightening up the day of an elderly or dying person as the presence of family.

According to Rabbi Earl Grollman, professional counselor in the field of death and dying, the number one fear common to the elderly and dying persons is the fear of dying alone. Not all the terminally ill and aged are as fortunate as Jacob was. Unlike him, they often die alone and unnoticed, without anyone to kiss, embrace and bid farewell.

The last nine months have been devastating. Travel restrictions, quarantines, the cancellation of family reunions and holiday celebrations, the closing of houses of worship, and human contact reduced to Zoom encounters have taken their toll on all of us. Personally, I have missed too many of the funerals of beloved friends. Yet, beyond all these human inconveniences and hardships, too many of our beloved seniors living in independent, assisted and nursing homes are isolated and lonely. For the sake of their health and safety visits have been cancelled and residents often quarantined in their rooms. True, this disease has targeted senior residential homes in disproportionate numbers. Yet, for seniors particularly, longevity is not only contingent on keeping the virus away, but also dependent on hugs, kisses and hands holding hands.

We are thankful the vaccines are here, and seniors and will be among the first to be inoculated. However, we still may be months away from “being back to normal.”

The Torah tells us, “When Jacob was told, ‘Your son Joseph has come to see you,’ Israel summoned his strength and sat up in bed.” The mere news of his son’s arrival caused Jacob to gather strength, to be renewed, to live with hope.

I, therefore, urge you now, reach out to those who live in isolation. Call or schedule a video meeting. Some residential homes even allow visits through glass windows or transparent barriers. Let those who dwell in isolation and loneliness know they are not forgotten, that we do care, that we all yearn for the day when our darkness fades and light will again fill our lives. Kein y’heyeh l’ratzon.

Please fill out this form to share "Between Love and Loneliness | Parashat Vayechi" via e-mail.