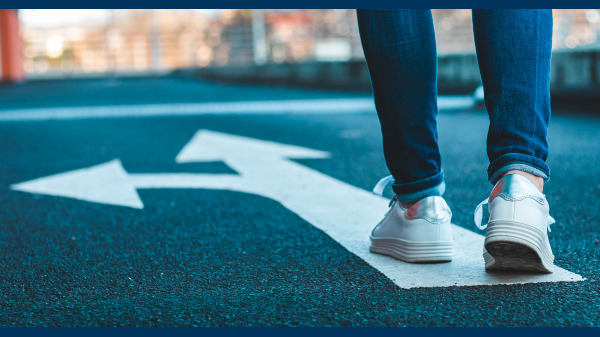 For the last eight months I have felt as though I have been frozen in place as though paralyzed not only by fear of a global pandemic, but also by the simple limitations of what I am able to do.

Have you ever been afraid to go forward or back?  Afraid to change your focus?  What about unsure of your footing?  It has happened to me.  A few years before I became a Rabbi, I lived and traveled in Israel.  While visiting a friend on his moshav we went for a hike in the Arava. To be honest, I have never loved hikes, especially hikes that took me up and over a number of ledges. The hike’s beginning was simple enough and the view was quite spectacular. However, after about twenty minutes I began to notice how pieces of the mountain below my feet began to tumble towards the valley floor. As I looked down, I realized that I also became unsteady. My eyes lost their focus and I had a sudden flash of fear for what might occur.

At that moment, my friend called to me to see how I was doing. I was thankful that he did, because it forced me to change my focus from looking down while imagining the doom that awaited me below, to looking forward.  I no longer wished to be out of the moment and instead I found myself in the moment, enjoying the experience and the views that to this day remain with me.

The steps that I took afterward were never the same. I was different. Something within me had changed. This was a turning point in my life. “Turning points” are moments when a decisive change occurs, hopefully with beneficial results. Turning points happen constantly in our lives.  Sometimes we find ourselves out on a ledge, and once there we need to decide what we are to do once upon it.

In B’reishit Rabbah we are taught that every use of the word “v’atah” in the Bible refers to “teshuvah[1].” Every use of “v’atah” implies a turning point – from a prior path onto a new one. “And now, Israel, what does God ask of you, but to (v’atah) turn towards the Eternal.”[2] Rabbi Abba bar Kahana said, “v’atah” signifies that the individual has reached a turning point in his life. In a sense God wants us to look over the edge and change.

The Torah provides us with many opportunities to explore turning points.

Joseph’s journey, for example, is full of turning points, as it sets up the narrative of the rest of the Torah. It is Joseph’s brother Judah from Parshat Vayigash whom we need to bring to the forefront of our conversation.

Parashat Vayigash, quite literally, keeps us on edge. We hang on to every word and every interaction. Will the brothers perish in Canaan? Will the brothers recognize Joseph? Will Joseph return the favor and send them to their deaths? As Judah draws near to Joseph – “vayigash alav yehudah[3];” we feel the enormous sense of anticipation that Judah must have felt –as if he were walking out on that ledge.

Maimonides says that one has truly changed when one is confronted with an experience one has had before, but instead of making the same mistake, one chooses differently[4]. This change plays out with Judah, as he approaches Joseph. Joseph demands that Benjamin remain in Egypt as a result of having stolen the goblet. What will Judah do this time? Perhaps this time Judah will walk a different path?

As Judah approaches Joseph he asks, “V’atah k’voi el-avdecha avi[5]”: “And now, if I should come to my father” without Benjamin he would surely die. And Judah continues, “V’atah yashev na avdecha tachat ha’naar[6]”: And now, let your servant Judah stay instead of the boy. Judah, who conceived of the plan to sell Joseph into slavery, now turns 180 degrees by offering himself in the place of Benjamin.

There are always obstacles on our path to change. Even when we have taken the first step towards change, outside circumstance sometimes get in the way. Joseph placed an obstacle in Judah’s path. Yet, Judah overcame it. Robert Alter explains: “In stark contrast to his willingness years before to watch Jacob’s struggle in anguish over Joseph’s supposed death, Judah’s entire conversation with his brother Joseph is a moving example of profound inner change[7].” (Alter 259).

Judah, not Joseph, serves as the paradigm for one who has undergone a sincere transformation. In Parshat Vayigash, when confronted with the choice to sacrifice another brother to Mitzrayim, Judah chooses to walk a righteous path. I believe that Judah saw the opportunity to change, and said to himself, “v’atah,” “and now” I am different.

Change is difficult. Never simple. Never easy. And yet many of us know stories about individuals who recognized their v’atah moment and effected change. Maybe it’s a grandmother who reconciled with her brother after 30 years; maybe it’s a man who turned his life around and became successful in his career; possibly it is a couple on the verge of separation who decided to fight for their relationship and reconciled. Perhaps some of us have witnessed the dramatic consequences when friends or loved ones missed an opportunity to change.  There is such a thing as too late.

Sometimes we do have second or third opportunities. If there is a chance to change, grab it. There is no guarantee that another might come around. “V’atah” moments are few and far between. We need to be ready when they present themselves to us.

Please fill out this form to share "The Turning Points in our Lives | Parashat Vayigash" via e-mail.