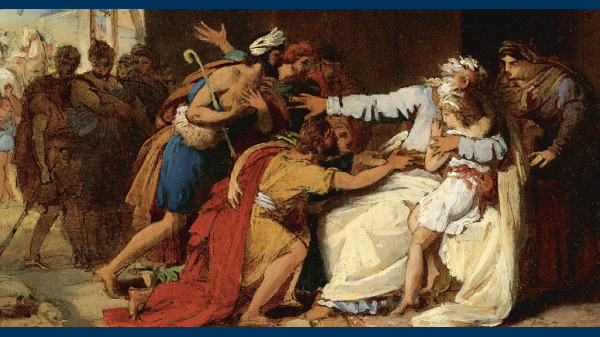 When I was at school, I remember that the collecting of football (soccer) stickers was very popular amongst us boys. We would buy packets of stickers, affixing them in an album, trying to complete teams and eventually fill in all the blanks. At school during break times (recess) there would be bartering and haggling as boys swapped the stickers for which they had doubles and triples in search of the elusive ones that they still needed. Swaps did not necessarily work on a one for one basis, as a rare sticker could gain several in exchange, and one of the shiny stickers (with the team logo on it) was always infinitely more valuable than the ones with just the players upon them. One of the major debates in the playground was the question of what would make a fair swap and exchange.

Unsurprisingly there is no swapping of stickers in our Torah, but there is a different for of bartering this week, as Jacob’s sons attempt to convince him to allow them to take Jacob back to Egypt.

Feeling the full effects of the famine, Jacob had sent his ten sons, less Benjamin, to Egypt to buy food. There, unbeknownst to them, they encountered Joseph, who was Vizier of the land and the one who was allocating the food to those in need. He treated them with suspicion and accused them of being spies, doubting their story of a father with 12 sons. Joseph challenged them and told them that he would keep Shimon in Egypt until the brothers returned with Benjamin to verify their story.

The brothers returned to their father Jacob with the challenge of finding a way to gain his approval to take Benjamin back to Egypt. They needed to return with their youngest brother if they wanted to rescue Shimon and if they wanted to procure further supplies. Jacob refused!

The continuation of the famine forced the brothers to enter negotiations with Jacob. First “Reuben spoke to his father, saying, Slay my two sons, if I bring him not to you; deliver him into my hand, and I will bring him to you again” (Bereishit 42:37). For Jacob this was not a fair swap. Eventually, “Judah said to Israel his father, Send the lad with me, and we will arise and go; that we may live, and not die, both we, and you, and also our little ones. I will be surety for him; from my hand shall you require him; if I bring him not to you, and set him before you, then let me bear the blame forever” (43:8-9). With this offer Jacob finally agree for his sons to return, with Benjamin, to buy food from Joseph in Egypt.

Both Reuben and Judah step forward with offers to ensure Benjamin’s safety. Reuben offers his sons as a guarantee, but Judah offers his own life.

My father-in-law, Rabbi Sheldon Zimmerman, has suggested that the question at the heart of Bereishit (Genesis) is the one that Cain poses to God: “Am I my brother’s keeper?” (4:9). As we read through the book the repeated answer we appear to receive is “No!” The book seems to set brothers up in enmity with one another rather than as guarantors for each other – Isaac and Ishmael, Jacob and Esau, Joseph and his brothers. At no point do brothers appear to take responsibility for one another.

At this moment Judah offers a different answer. In offering his own life, he answers in the affirmative: “Yes, I am my brother’s keeper.” It is this offer that is acceptable for Jacob and it is with this offer that we finally hear a positive answer to Cain’s question. Through Judah’s actions the brothers are able to return to Egypt, to survive the famine, and to ultimately be reunited with their brother Joseph. It is also this moment that allows the book of Bereishit to come to an end; we have been waiting for someone to stand up and say “I am my brother’s keeper,” Judah gives us the answer we have been waiting for. And he offers Jacob a fair swap to be allowed to take Benjamin to Egypt.

Please fill out this form to share "A Fair Swap | Parashat Miketz" via e-mail.