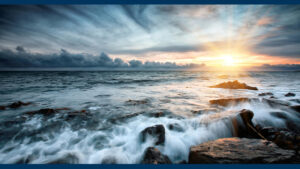 No other Torah portion is as well known or fires the imagination as much as Parashat Noach – but the story includes a number of problematic elements. For instance: How could a 600-year-old man build a cruise ship in his back yard? Would the animals come two by two or 14 by 14? How could they survive in that ark? Why would God need to undo creation to respond to the failures of a generation?

The most difficult element of the story comes at the end. After Noah and his family have survived this incredible ordeal and emerge from the ark, God shows them a rainbow as a sign of the first covenant between humanity and God:

“Never again will I doom the earth because of man, since the devisings of man’s mind are evil from his youth; nor will I ever again destroy every living being as I have done.” (Genesis 8:21)

Any parent will recognize the failings of this approach. This phrase amounts to, “My children, you have done wrong, and I am disappointed. If you ever do this again, I will not punish you next time.” If a sin is punishable on the first offense, should it not be more punishable if the misstep is repeated?

Yet, the message of Noach is as profound as it is surprising.

The Divine One is no ordinary parent. After creating the earth and all the beings within it and seeing what a mess that humans can make of it, God makes an amazing and brilliant parental statement: “I will clean up your mess only once. Creation is a miracle and a gift to you. Whether you make the best or the worst of it, the consequences and responsibility are yours.”

It has taken us thousands of years to absorb this lesson. If we continue to destroy its climate and its biodiversity, God will not press a Divine reset button and start life over again. Noach was a one-time story; this world is ours to lead and honor, both in terms of nature and humanity.

The portion tells us that the earth became corrupt before God, filled with lawlessness (chamas). There are many ways to translate this key word; while some choose “violence,” I prefer the JPS translation of “lawlessness.” Human beings need laws; we need structure, order, and a justice system to have a society that is sustainable, significant, and adheres to sacred values.

However, laws and rules are not nearly enough; we must also have proper underlying attitudes.

How do we look at other human beings? A common but troubling answer is found in Genesis 10. This chapter is often ignored, as it appears as a list of the world’s 70 nations. What seems like a mundane series of names, however, is actually a worldview. The organization of these nations is based on the three children of Noah: the sons of Shem are “us,” meaning they include all who are to be part of our society; the sons of Ham are “them,” meaning they include our enemies and partners in conflict; and the sons of Japheth are everyone else, meaning they do not figure prominently in our worldview, but we know they exist.

Sadly, it seems we still often divide the human family into those who are with us and those who are against us. As a result, we forget that people we consider “them” are created in the image of God, just as “we” are.

The COVID-19 pandemic challenges us to demonstrate whether we are willing to value the lives of others through social distancing and wearing masks. The murder of George Floyd and other instances of violent racism remind us that behavior that devalues human life makes the rule of law impossible.

Since the story of Noach, we have known that the world will be lawless unless we know that we are all in one boat, residents of one garden, children of the One God.

Please fill out this form to share "The Divine is No Ordinary Parent: Lessons from One God to One People | Parashat Noach" via e-mail.