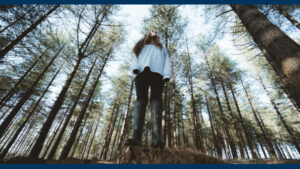 “God said, ‘Let us make Adam in our image, after our likeness. They shall rule the fish of the sea, the birds of the sky, the cattle, the whole earth, and all the creeping things that creep on earth.'” (Genesis 1:26)

At the very moment of the creation of humanity, the biblical narrative assigns a purpose to that creation. This is unique. Nothing else created by God is described as having been gifted with responsibilities. The relationship of humanity to the natural world is encoded from the beginning with the language of power. It is to be humanity’s unique destiny to be created with a grammar of power relations.

The Hebrew word translated as “rule” is “yirdu.” It is the language of domination. But the great eleventh-century biblical commentator, Rashi, introduces a novel consideration here. He suggests that this is actually a conditional statement. The word, he explains, has a dual valence to it. While it does have the meaning of “ruling,” it is also related to the word for “descending.” This hints at humanity’s moral responsibility. If humanity is zacha (meritorious), then it will dominate. If humanity is lo zacha (not meritorious), then humanity will be subjugated (literally, “descend”).

Rashi’s introduction of a conditional moral clause to the idea of humanity’s assigned role of domination over all that lives should give us pause to reflect on our relative merit at this moment in time.

We are living in a time of unprecedented environmental peril. We are witnesses to mass extinctions, to global warming, and to hundreds of millions of people struggling with food insecurity. And we now find ourselves subjected to a viral pandemic coursing across the entire globe. At this moment, humanity is witnessing what it means to live subjugated to nature.

Following Rashi’s train of thought, it would seem that we are living in a time when we are “lo zacha” (not meritorious), when we are subject to the natural forces of destruction and death that we ourselves have unleashed.

Although we read that on the third day of creation God brought forth vegetation (Gen. 1:12), we learn a few verses later that nothing had sprouted before humanity’s creation (Gen. 2:5). Modern scholarship, concerned with tracing textual origins, resolves the contradiction by assigning the former verse to a document strand known as P, and the latter verse to a different document strand known as J.

A far more entertaining read, however, is offered by Rashi that seeks to resolve the discrepancy. In his commentary on the verse, “God had not brought rain upon the earth, and there was no man to till the soil,” (Gen. 2:5), Rashi claims that although there was vegetation after the third day of creation, it had not yet protruded above the ground surface because God had not yet caused it to rain, choosing instead to wait until after having created humanity. Why? Because God wished for humanity to recognize the “tuva”, the goodness, of the rains. Going one step further, Rashi adds that humanity’s recognition of the need for rain in the world led us to pray for it, which caused it to descend, resulting in the sprouting of all vegetation.

A remarkable feature of this reading is that it connects God’s seeing the goodness of the creation of vegetation on the third day with humanity’s apprehension of the goodness of that creation. It is the flourishing of nature itself that marks it as “good.”

Since this part of the Genesis narrative comes before Adam and Eve eat from the forbidden tree which gives them knowledge of good and evil, it appears that Rashi is willing to entertain the possibility that human awareness of our connectedness to nature is a kind of natural moral knowledge that was not problematically acquired. While dominion over plants and animals is given over to us, it is assumed at the same time that humanity’s created condition perceives that its own needs and the flourishing of the natural world are intrinsically connected.

Extrapolating from that creative reading, that the flourishing of life on earth followed because of our proper appreciation for that life and our prayerful support for its needs, it follows that our current ecocidal behavior is a negation of that seminal moment of created connectedness. We perceive only that which we may take, and not that which sustains.

In this terrifying era of a worldwide pandemic, however, an opportunity now presents itself to us. Fundamental changes in daily life have been forced upon us, which, however temporarily, has abated our ongoing reckless ecocide. A growing number of progressive rabbis are calling attention to the possibility of reframing this moment as one of Shmita, a sabbatical year, a time of radical release from continuing to live in an unsustainable way. New ways of thinking and behaving are required. No longer can “ruling” over the earth mean simple domination; that is leading only to our own destruction.

Now is the moment to recover that seminal moment of creative intention, when we were tasked not only to rule, but also to appreciate the goodness of creation. The grammar of power relations that was given in the Garden of Eden was never intended to give to humanity the right simply to consume that which may be taken. Reading the text as Rashi does, binding the concept of “ruling” to “merit,” urges upon us a radical reconsideration of our relationship to the natural world. To merit our position of power, we are called upon to recognize the goodness of creation by taking action to sustain it.

Please fill out this form to share "Humanity’s Power Struggle with Nature | Parashat Bereshit" via e-mail.