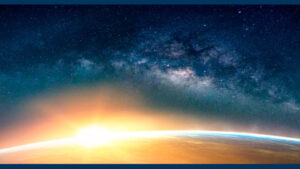 After each set of the shofar blowing during the Rosh Hashana service we say “Hayom Harat Olam”: “Today is the Birthday of the Word” or perhaps more precisely “Today is the gestation of the World”.

In other words, at Rosh Hashana we celebrate our World’s anniversary and we do not need any social media reminder in order to remember it.

Nevertheless, for our Sages the thing is not necessarily an evidence. Tractate Rosh Hashana (11a) tells the discussion between Rabbi Eliezer and Rabbi Yehoshua. Eliezer considers that the world has been created in autumn since it is written in Genesis (1:11) “Let the earth sprout vegetation: seed-bearing plants, fruit trees of every kind on earth that bear fruit with the seed in it.” Since vegetation needs humidity to grow, he assumes that the scene took place in autumn, during the month of Tishri… On the opposite Rabbi Yehoshua says that the world has been created during the spring. He quotes the same verse telling that it is well know that vegetation is growing in spring…

Finally, tradition follows Rabbi Eliezer’s opinion and we do celebrate the New Year as the World anniversary.

How can we understand it? Probably by saying that as Jews when the New Year starts and when we are considering the world’s gestation, we do it filled a of a feeling of vulnerability. Following Rabbi Eliezer, we remember that our world is born in a moment of fragility and humility. When the spring announces the summer and the strength, autumn announces the winter and its perpetual concern for life and survival.

And indeed, when the year starts we are not proud and arrogant but humble. We are not living with the illusions of the summer to come but with the fear of a hard winter. The accounting of our soul that we start does not drive us toward narcissism but asks us the question how to be better.

In Hebrew the verb “improve” is said “leshafer” and we do notice that it has the same root as “shoffar” the horn in which we will blow during the festival.

The sound of Shoffar can create amazement and discomfort and then creates many questions. All of these questions are here to invite us for an improvement.

Nobody’s perfect and the last months have without doubt not been perfect but by asking ourselves the right questions at Rosh Hashana we certainly give us a chance to be a bit less imperfect. Let’s start the year and its benedictions.