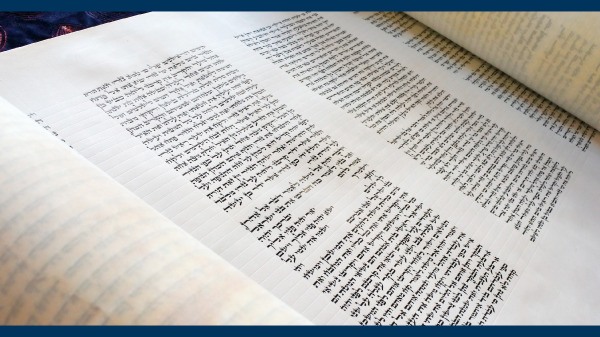 We are living through a time when people all over the world are calling for reform. People are calling for fair and equal treatment before the law. The headlines talks of oppression.

Judaism is no stranger to searching for change. And almost always, the movement for change includes a text from the Bible.

So, let us start with the simple meaning of the text and see how Jewish tradition seeks new meanings in the words we read this Shabbat.

Early in our Torah portion we read about an ancient custom that when we enter the Land, we are to take a basket of first fruit and bring it before the priest and say, “My Father was a fugitive Aramean” That is how Rabbi Plaut uses the JPS translation page 1508. However, a few pages latter on 1512 Rabbi Plaut tells us no one is sure what these three words mean.

Let us take a step back and remember that the book of Deuteronomy is virtually the book of Moses. You won’t read much here at all about Abraham Isaac and Jacob, and never mind Sarah Rebecca Rachel, and Leah/ So too Aaron. Oh, Aaron is there a few times but each time for condemnation not for praise. And you won’t see the story of the Red Sea opening miraculously to save us, but you will read how Pharaoh’s soldiers drown in the Sea of reeds.

Again, it doesn’t say so, but when we collect the first fruits and bring them to a certain place, we assume probably Jerusalem, because the book of Deuteronomy rejects other sacred locations. And then in a very few lines a history of the Jewish people: our people lived in Egypt for a while and were enslaved, and also that they got out.

The Passover Haggadah tells the story of Egyptian slavery for many pages, and yet this phrase from our Torah portion is placed at the very beginning of our Passover Haggadah. After a few pages the Haggadah falls into a long discussion about the treachery of Laban the Aramean.

Reading between the lines: both books react to a political crisis. Deuteronomy needs to refurbish the image Moses in order to fight against the worship of the Foreign God brought in by some of the Kings of Israel no less.

Deuteronomy looks back nostalgically on the good old days when the Jewish people were faithful to God in the time of Moses.

And the Haggadah needs that Aramean “Laban” to explain to the Jewish people of the time how to cope with the Egyptians.

Both books have it in for the Egyptians. However, by the time that the Haggadah was written the Egyptians were no longer a threat to the Jewish people.

Now, please notice what happens to our verse (“My Father was a fugitive Aramean”) interpreted through the eyes of the Rabbis who wrote the Haggadah. We are caught between the Haggadah and the Torah.

Certainly, the Haggadah is offering another way of reading between the lines, as the Haggadah translated, now: “An Aramean sought to destroy my father.”

I don’t think we can ever totally solve the translation puzzle.  However, let me offer a solution. Step back for a moment to look at the difference between the Haggadah and the book of Deuteronomy. One of the ways of translation is to see the words in the bigger context. So, if you ask people what the Passover Seder and the Haggadah are all about, people will tell you freedom, or the time we were slaves in Egypt.

And what about Deuteronomy? It is the last of the five books of Moses. Just as its name implies, it is the second telling of the laws of Moses.

But the ironic part is that the Haggadah doesn’t mention Moses even once. The authors of the Haggadah meant to teach Jews sitting at a Passover Seder to put their trust in God. As God once redeemed us from Egypt and brought us out from slavery so too, soon God would redeem us again. This is not the work of Moses, because Moses is a human being and we were approaching the time when the messiah would appear. It has to do with persecution. The father doesn’t care at all about Laban in the Bible. He is teaching the child how we practice our religion and even in the face of oppression.

The Haggadah takes the Aramean for a pun about Romans. Read slowly in Hebrew and using the verb a bit differently. A Romi Oved Avi, A roman is murdering our Fathers.

The Haggadah is all about how the Egyptians lost an empire, just as the Rabbis assume the Romans will too. As for the Jewish people, the book of Deuteronomy reminds them of the ethical path using the Egyptians  as an example of what will happen to people who oppress other people.

Again, reading between the lines. We tell the priest in Jerusalem our story, “You know we used to be Arameans wandering around eventually going down to Egypt where we were treated harshly.”

For the authors of Deuteronomy, The Arameans are the Assyrians. These Assyrians had so dominated the region that they already destroyed the 10 northern tribes of Israel and led them into exile. King Manasseh thought the best was to placate the Assyrians, was to be like them. He brought in the worship of Foreign Gods and a bloodthirsty system of sacrificing human children.

The book of second Kings tells us that Josiah, the King, just happened to find the book of a lost book of the Torah during a temple clean up.

The book that they found changed Judaism forever. It surely was one of the great religious reforms of all times, and the beginning of the reforms that would be coming in Judaism. Like the Haggadah, it was written in the face of adversity. And like the Haggadah they somehow believed if they could only practice their religion they would go on in history. Is it a coincidence that the rabbis found our little verse, “My Father was a fugitive Aramean” and used it to make fun of the Romans? Or did the rabbis know that way back in the time of King Josiah that the people would say these words and appreciate what they had, and what they could still do.

Please fill out this form to share "The Art of Writing in the Face of Adversity | Parashat Ki Tavo" via e-mail.