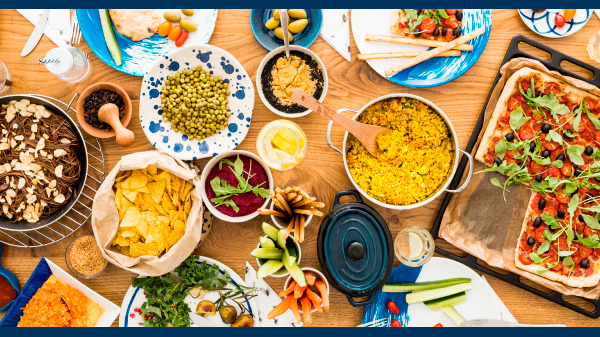 At the beginning of the pandemic in the United States, procuring food was a challenge. Grocery shelves were bare, CSAs (Community Supported Agriculture) were overwhelmed, unable to accept new customers, and grocery deliveries were rarely complete. I remember one order I placed back in March: of twenty-seven items, only nine arrived. Maybe because we were home more or because we needed an outlet for our anxiety, cooking and baking became a focus and for a long period yeast was nowhere to be found. Food, its procurement, preparation and consumption began to dominate our lives along with, in some people, a great longing for a return to eating in restaurants again.

Food, or at least the rules of what we should or should not eat, play a prominent role in our Torah portion this week, Parashat Reeh. In Deuteronomy Chapter 14: 3-21 we have a list of animals, birds, fish and insects we can and cannot eat, parallel to the extensive list in Leviticus 11. While my mother, and some classical commentators, saw these rules as related to health and safety, others like Abravanel, felt that reducing the motivation for kashrut to physical health demeaned its spiritual importance. More commonly, explanations have been given for the seemingly arbitrary requirements as being related to developing discipline in those who practice Kashrut, or in maintaining the distinctiveness of the Jewish people. Being holy is mentioned in connection with these laws in both their Levitical and Deuteronomistic settings, reminding us of the early meaning of the Hebrew root K.D.Sh. as set apart.

Zooarcheologists, those who study the remains, bones, horns, and teeth of animals to reconstruct the practices of ancient peoples, offer their own perspectives. Dr. David L Carmichael suggests that perhaps what rendered an animal kosher was its means of locomotion, that is if moved in a way that was natural to its environment. Trying to understand what was practiced in ancient times, zooarcheologists have been particularly attentive to the presence or absence of evidence that pigs were consumed, finding these only infrequently in the earliest layer of Iron age Canaan, except in Philistine sites. However, this shifts a bit over time.  Dr. Lidar Sapir-Hen found that in the period of the Divided Monarchy evidence of the consumption of pig is found more frequently in the north. Was this a sign of religious deviation or merely a reflection of the need for a quickly maturing animal protein source to feed a growing urban population? The symbolic power of refraining from the consumption of pig seems much more pronounced later in the Persian and Greek periods and we may be the ones projecting our focus on the pig back into earlier periods.

The traditional understanding of the Biblical text sees all the meat eaten during the desert wanderings, as having been part of the sacrificial cult. The rules we have about eating meat once the people are in the Promised Land but are unable to come to the place which the Eternal has chosen, is a concession, perhaps even a grudging concession, to human appetite. The special rules that we find in  Deuteronomy Chapter 12:20-28, concerning the consumption of meat outside the sacrificial cult, refers to a lust for meat, ta’avah, the same word used for the unsavory desire of the people for meat in the desert that lead to the incident with the quail (Numbers 11).

Rabbi Abraham Kook saw in the negative characterization of the people’s appetite for meat, a hesitation in our tradition’s endorsement of this practice. He noted God’s original intention as expressed in Genesis 1, that humanity and animals be vegetarians and not carnivores. Despite the more common rabbinic view of seeing meat as part of the joy of Shabbat and holidays (“only in meat is there joy,” Talmud Pesachim 109a), Rav Kook believed that our Torah portion hinted that we should be reducing our meat consumption.

At a Hazon conference at UC Davis in 2011 I ran into a then rabbinic student, Aaron Potek, who was suggesting a practice of eating Meat Only On (Special Occasions), Shabbat, and Yom Tov. I have found this an excellent compromise between the needs of our planet and the human tendency, at least for some, to find pleasure, satisfaction and even a sense of particular nourishment from meat. As it happens, the seven counties today with the largest Jewish population, Israel, the U.S., France, Canada, Russia, the U.K. and Argentina are all among the major consumers of meat. Were the residents of these countries to reduce their meat consumption to 1/7th of their current levels, the benefit to the world and to their own health would be significant. Some will do more and chose to become fully vegetarian but if a communal norm of MOOSSHY could prevail in the Jewish community, we could lead the way towards a more responsible food practices. The section about this secular slaughter concludes with the admonition that we do that which is good and right, hatov ve hayashar. Surely taking steps which make us healthier and protect the wellbeing of future generations, falls into that category.