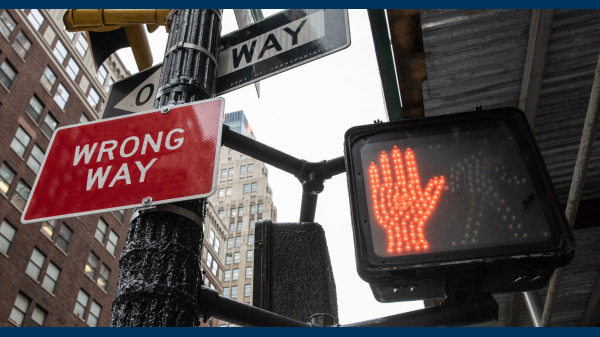 Have you ever ended up somewhere that you wish you had not? Sure there were signs along the way warning you that it was a mistake. But for some reason you didn’t see them, you didn’t recognize them, and you kept going down the wrong path.

Often, it is so much easier to see someone else, not you, going down the wrong path. You try to warn them. You can see that they are making bad choices. But sometimes, for some reason, they can’t hear you and they keep going down their path that you see ends in no good and they are blind to it. And you are helpless to stop them.

In this week’s double Torah portion, Chukat-Balak, we encounter Balaam a hired diviner who was hired by Balak, king of Moab, to pronounce curses over the Israelites. Three times on his way Balaam encounters an angel of the Lord with a sword drawn in his hands literally blocking his path.

The story then goes on to reveal that while Balaam can’t see this angel, his donkey can. And when the donkey, seeing the angel with sword drawn, tries to stop Balaam and refuses to proceed down the path, Balaam frustrated at his donkey and blind to the angel, beats his donkey. Only when the donkey talks to Balaam and the angel reveals himself does Balaam understand how much he has misread the situation. He says to the angel, “ I erred because I did not know that you were standing in my way. If you still disapprove, I will turn back.” (Numbers 22:34).

The Hebrew word for angel, malach, means messenger. Angels, like the ones we read about in this week’s portion, are messengers from God encouraging us to journey on or to warn us to stop and change paths. While it may be instinctual for us to appreciate the messengers that affirm us and give us hugs, sometimes it our adversaries, those who stop us from going down the wrong path, who are our most needed angels.

Rashi the 11th century biblical commentary explains this verse by saying that the angel that Balaam encounters was really an angel of mercy, a malach shel rachamim haya who wanted to prevent him from sinning so that he would not sin and perish. The angels in our lives are often unseen and even when they are visible they often are not perceived as angels. Some carry swords and some carry petitions, some are messages of pain, and some are messages of failure and often we can’t see them.

Beyond the irony that Balaam, a prophet of the Lord, couldn’t see the angel in front of him while his donkey could, hides an important observation that even the smartest of us are often blind to the truths that are so evident to others.

This week’s Torah portion reminds us that there can be warnings when we take the wrong path in life if we are aware enough to notice them or if we are open enough to listen to others around us who could help us see what we are blind to.

Balaam explains to the angel that the reason he erred was because he did not know. In Judaism, a foundational idea is that we often make mistakes because we don’t know better. If we did know better, we would act better. Study and learning are the tools that we have to improve ourselves as individuals and collectively as a people. As Hillel famously said, “the ignorant cannot be pious.” (Pirke Avot 2:6). This idea holds open the hope, the promise, that we can improve, that our world can be better though education and learning.

Which way is our world headed? Can we as a people, can humanity, see the angel in the middle of the road waving the sword of warning? Can we read the messages; can we hear the warnings before we go down the wrong path?

Thus said the Lord your redeemer, the Holy One of Israel:
I the Lord am your God,
Instructing you for your own benefit
Guiding you in the way you should go.
If only you would heed My commands
Then your prosperity would be like a river
Your triumph like the waves of the sea.

The story of Balaam, with a talking donkey and angels blocking paths is hard for us moderns to take seriously. But while I am not so sure about the existence of a talking donkey in our world, there is no doubt in my mind that angels such as described in this week’s torah portion truly do exist, and that most of the time we are blind to them. As we journey through our world, may our eyes be opened wide to the angels, the messengers we might encounter, that we might know what is before us so that we might all make wise choices.

Please fill out this form to share "I Erred Because I Did Not Know | Parashat Chukat-Balak" via e-mail.