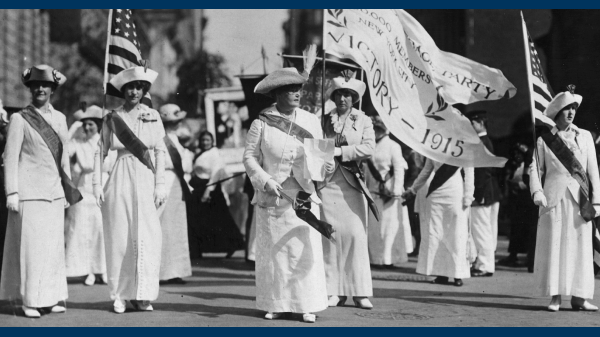 To celebrate the 100th anniversary of women’s suffrage in the United States this year, Rabbi Carole Balin, Ph.D., is sharing eight chapters of an “alternative Book of Numbers” designed to tell the stories of Jewish women who combined civic engagement with Jewish values in a 40-year struggle “in the wilderness” to pass the 19th Amendment.​

No biblical character personifies rebellion like Korach, whose eponymous Torah portion Parashat Korach arrives this week. In an opening gambit, Korach questions why his cousins, Aaron, Miriam, and Moses, have elevated themselves above the rest of the Israelite community, warning, “You have gone too far!” (Num. 16:3)

While his challenge to divine authority may strike us as similar to that of rabble-rousing suffragists to patriarchal dominion, the women who made up the movement to ratify the Nineteenth Amendment projected a refined sensibility that belied their rebellious acts.

For Korach, it does not end well. According to the medieval commentator Rashi, this is the fourth instance of rebellion in the wilderness – following the golden calf incident, complaints about food, and the spies’ negative reportage – and God has had enough. The Divine splits open the earth, and Korach and his followers are swallowed whole into the abyss, leaving behind a giant gap in the Israelite population. A reason, some say, that Korach means “baldness.”

Rabbis argue that this is the most dangerous incident to occur during the wilderness trek, even more damning than the attack of the Amalekites, who snuck up from behind to attack the Israelites’ most vulnerable (Ex. 17:8-16). Korach’s uprising had to be crushed, they say, to maintain God’s omnipotent rule. Consequently, the name Korach is synonymous with rebellion in Jewish tradition, and the punishment meted out to him is considered justly deserved.

The image of hotheaded Korach is at odds with American suffragists, themselves rebels, who are, however, popularly portrayed as genteel women in white. Even as they sought to disrupt the status quo by advocating and agitating for participation in elections, most presented as fashionable women of the middle class.

Think Mrs. Banks in Mary Poppins: She wore dresses with hemlines that rose above the ankle (which, coupled with the gradual jettisoning of corsets, allowed for less restrictive physical movement), boots on her feet (to cover exposed ankles, as modesty dictated) and floppy, Edwardian hats of the era (then regarded as the height of fashion, no pun intended). Susan B. Anthony, for example, was known for conforming to contemporary fashion trends and believed that a woman did not have to dress “like a man” to achieve the same rights; Elizabeth Cady Stanton, however, felt fashion kept a woman from achieving her potential and was merely one more element in a larger social structure that kept females subordinate to males.

However they chose to dress, all suffragists agreed on the color of clothing at public events: They wore white from head to toe. The color served as a visual re-appropriation of so-called markers of femininity such as purity, piety, and virtue. What’s more, with white as their calling card, the suffragists dazzled in the streets during protests and parades and stood out in the black-and-white photographs that appeared in the press. (Recall the memorable image of women in white in the House Chamber during the 2019 State of the Union.)

The suffragists’ armor was a defense against criticism of appearing too intimidating or “masculine,” even as they challenged longstanding patriarchy with gutsy actions. Rather than confining their mission to the parlors and meeting halls of their more conservative sisters, suffragists created large-scale, public spectacles – what Penn State professor Jamie Schultz calls “physical activism.” The suffragists’ “articulation of physical activity and political activism struck simultaneous blows to the myths of women’s physical and political inferiority,” Schultz says.

It was, in fact, suffragists who, in 1913, staged the nation’s first march on Washington to call attention to a political cause. Along with 20 parade floats, nine bands, and four mounted brigades, more than 5,000 women, including many Jews, marched up Pennsylvania Avenue. The event, which was strategically held a day before President-elect Woodrow Wilson’s inauguration, was widely reported in the press and led to congressional hearings on the vote for women.

One year later, Marguerite Rosett Bishow (1900-1992), a Jewish 13-year old from Baltimore, came of age as a suffragist by participating in a burgeoning form of physical activism known as a “Suffrage Hike.”

The first such hike occurred on December 16, 1912, when 200 women departed New York City for a 170-mile trek to Albany in bitterly cold weather (in ankle-length skirts!) to draw attention to their cause. Marguerite quite literally followed in the footsteps of her mother, Sophie, who led a similar pilgrimage from Baltimore to Annapolis in order to present a suffrage petition to the Maryland state legislature.

Marguerite had witnessed her mother bolting to independence four years earlier when her parents divorced. Left by her husband, Adolph, a well-known physician, Sophie established a hat shop to feed her six children. Marguerite, the youngest at just 10, watched how her two oldest sisters, Anetta and Paulina, worked alongside her industrious mother as milliners.

As she matured, Marguerite’s involvement with the suffrage movement deepened. By the time she was 17, she was joining others at the White House to picket against Wilson’s continued opposition to the Nineteenth Amendment. Like the march in 1913, suffragists, too, originated this form of “physical activism.” 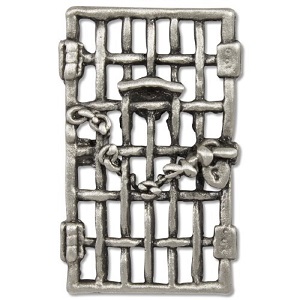 Two years later, Marguerite’s rebellion was on full display when she was thrown in jail, along with three other women, for her outburst during the trial of Sarah Tarleton Colvin, the leader of what was known as a “watchfire.” On January 1, 1919, suffragists had launched yet another protest tactic, whereby they perpetually burned Wilson’s speeches in an urn propped up in front of the White House.

Marguerite’s first jail term lasted 48 hours. A month later, she served five days for participating in what would be the final watchfire. When she turned 20, she played the role of blindfolded Justice in the suffragists’ living tableau, a demonstration staged at the Maryland House of Representative to urge legislators to ratify the Nineteenth Amendment. (Maryland would reject the amendment on February 24, 1920 and not ratify it until 1941.)

In a ceremony that took place in February 1921, the National Women’s Party awarded Marguerite and her mother jail door pins for their chutzpah.

You can bet that they affixed the silver pins in the shape of a prison door with a heart-shaped lock to their white dresses.

Please fill out this form to share "Not All Rebellions Look (or End) Like Korach’s Did | Parashat Korach" via e-mail.