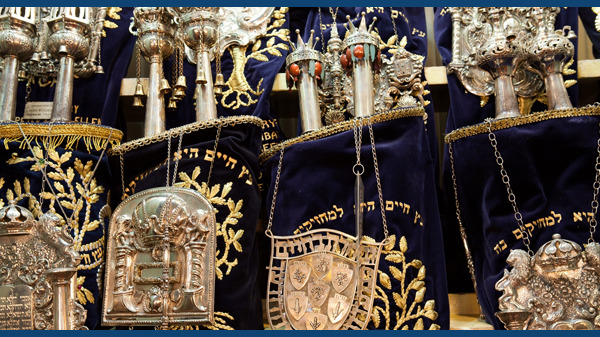 Make sacral vestments for your brother Aaron…These are the vestments they are to make: a breastplate, an ephod, a robe…On the hem [of the robe], make pomegranates…with bells of gold between them all around. (Ex. 28: 2,4,33)

A few months before the celebration of my bar mitzvah, my father came to me to help him with the recitation of blessings over the Torah, an ‘aliya.  I was reasonably practiced in them by that time, but I was also curious about why my father needed to know the blessings.  He explained that he had been asked, as a Kohen, to have the first ‘aliya at an upcoming service in a Conservative synagogue.  I was surprised – not that a local congregation had chosen to honor him with an ‘aliya, and not that he was rusty in reciting the blessings  – I was surprised because I never knew that he was a direct descendent of the Aaronide priests!  “How do you know you are a Kohen?” I asked.  My father replied, “My father was one, and his father before him.”

I was closing in on my thirteenth birthday, and had never before learned of this element of my family’s status among the People Israel.  The reason for this is simple.  It was virtually irrelevant.  Reform Judaism had long abandoned the distinctions among Kohen, Levi and Yisrael.  It is in this context that I regard the Torah portion (parashah) T’tzaveh.  In Chapters 28 & 29 of Exodus, Aaron and his sons are first designated as the Kohanim, the priest of Israel.

The Reform Jewish disdain for maintaining a special status for the Kohen is not especially radical.  The first mishna of the Tractate Avot, The Sayings of the Fathers, establishes a line of succession of the reception of the Oral Torah from God to Moses and on to the Sages.  The line is God to Moses to Joshua, the elders, the prophets and the members of the Great Assembly.  The priests are clearly excluded.

Even the precedent that Kohanim are given the “honor” of the first ‘aliya at a public reading of Torah is a backhanded compliment.  The mishnaic tractate Gittin (5:8) teaches that the reason for extending the first ‘aliya to the priests is “in the interest of peace.”  The issue is not principally one of showing respect for the status of the Kohen, it is rather an expedient for avoiding tension in a congregation over the assignment of readers.  In the two millennia since the destruction of the Temple, the priest has become a virtual spectral figure.  Within traditional congregations, the kohen’s role has been reduced to a few ritual acts (pidyon ha-ben after the birth of a first boy in a family, and the reciting of the priestly benediction at Festival services), as well as that first ‘aliya.  It is a status with no stature.

Since the destruction of the Temple in Jerusalem in 70 C.E., the priests have been essentially unemployed, and substantially written out of Judaism.  An institution, the priesthood, that had been a dominant part of Jewish life for at least 1000 years, does not, however, disappear so easily.

Rabbinic Judaism engages in a subtle but powerful transformation.  The detailed depiction of the priestly garments in the Torah portion includes an odd and intriguing element, that the hem of the robe be lined with pomegranates and bells.  Pomegranates are fairly large fruits, so the passage is best interpreted as indicating a pomegranate design, or perhaps fabric balls shaped in the distinct form of a pomegranate.  Priestly robes are no longer made, but one significant object in Jewish life is indeed robed.  It is the scroll of the Torah!  And more to the point, most Torah scrolls are adorned with a breastplate and with finials on its wooden staves.  These finials are called rimonim – –pomegranates – and are usually festooned with tiny bells!

From the establishment of the Davidic Kingdom of Israel to the first century of the Christian era, Jewish life and thought was rooted in Zion, a marked location on a hill in Jerusalem.  It was here that heaven and earth met; that the commanding and nurturing presence of God could be encountered through the administration of a special class of Israelites, the priests.  Then Zion, as the mysterious and elusive place of God (only the High Priest could enter the Holy of Holies), was replaced in Jewish practice and thought by Sinai, equally mysterious but open, as all Israel was present for God’s revelation.  The Temple became the words of Torah, and the priesthood – the intercession between the faithful human and the divine will – was invested in the scroll, with its robe, breastplate, pomegranate crowns and bells.

The Torah moves the ancient religion of Israel forward into the covenantal religion of Judaism.  Yet, the connection with the past is not severed.  When the Torah scroll is taken from the Ark for a public reading, we recite words from Isaiah: Out of Zion came forth the Torah.  Not “out of Sinai” but rather “Zion.”   The Temple and the synagogue, the Torah and the majesty of the priesthood are fused.  At one and the same time, we stand at the base of Sinai and in the Temple courtyard, as Heaven and Earth touch.

Please fill out this form to share "The Sacred Vestments | Parashat Tetzave" via e-mail.