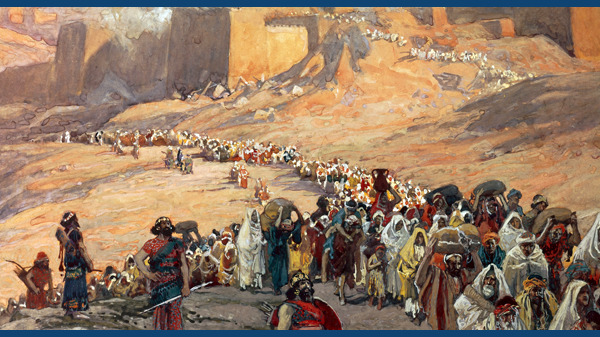 We know the end of the story. Despite the size and power of the Egyptian army, the Israelites will become a free people. The victim will become the victor. The weak will defeat the mighty. But there is one odd phrase in this week’s Torah portion that brings this premise into question.

“The angel of God, who had been going ahead of the Israelite army, moved and followed behind them; and the pillar of cloud shifted from in front of them and took up a place behind them and it came between the army of the Egyptians and the army of Israel. Thus there was the cloud with the darkness, and it cast a spell upon the night, so that the one could not come near the other all through the night.”

Rashbam clarifies that the cloud was placed between the Israelites and Egyptians so that the Egyptians would not be able to approach the Israelites. Sforno underscores the point by saying that it was evident that this was the case because the Egyptians clearly had the advantage of speed and might due to the strength of Pharaoh’s army.

We need not look further than our own textual tradition to see how the perception of weakness is actually deceiving. Malcolm Gladwell points this out in his book, David and Goliath: Underdogs, Misfits and the Art of Battling Giants. He uses the premise of the story of David and Goliath to show how we commonly think of the story as the tiny David who battles the giant, Goliath, in one-on-one contact. Obviously, Goliath will be victorious, but David defeats the giant. The underdog wins. Gladwell shows how we, the reader, misread the story. He demonstrates that Goliath actually had the disadvantage. David was a skilled warrior and fought from a distance. This was not what Goliath had been expecting. Goliath came to fight in close combat. David showed up with a slingshot to fight from afar. “Goliath had as much chance against David,” the historian Robert Dohrenwend writes, “as any Bronze Age warrior with a sword would have had against an [opponent] armed with a .45 automatic pistol.” From this we learn that our own assumptions should be questioned.

There are times when we need to create a new narrative for ourselves. Stories are the basis for who we are. In fact, there is an emerging field of study called “Narrative Identity” which explores the connection between story and the formation of identity for the individual and society. The field attempts to explore the narrative to which people ascribe to create meaning as to who they are. It is no wonder that our own Jewish narrative has been shaped in the way it has. This one line could be evidence that our exodus story could have been very different. But, it is essential for our people’s story for the theme to be maintained.

Story crafts identity. B’Shalach is more than a story of the fight for freedom. It is our story for our Jewish identity. When we enact the story we are told that we are supposed to feel as if we, too, were slaves in Egypt. We do not just tell the story. We are the story.

Yet, we have this one moment when we are seen as equal to the Egyptians. We learn from this that, though, we may be perceived as weak and helpless, we can rise up and be seen as equal to the mighty. We should not forget our own hidden power. We have the strength within us to stand up to tyrants. We need to embrace this part of our story as much as our traditional story of redemption.

Please fill out this form to share "Story and the Crafting of Identity | Parashat Beshalach" via e-mail.