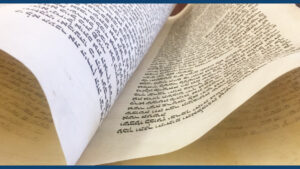 Whenever the Sidre Bo approaches, I always remember what I learned when I was a first-year rabbinic student, 1968-69, HUC-JIR-LA, studying up-on-the-hill! The course on commentaries was taught by Rabbi Dr. Stephen M. Passamaneck, z”l whose pedagogical presence was transformative. While smoking, a pipe or cigarette or cigar, and walking around the room like the Oxford University Don who taught him, Passamaneck demanded that we do much more than translate and recite the commentaries we had studied. He would constantly ask, “Was fragte Rashi?” ‘What is Rashi asking or What is the question that stimulated Rashi’s comment?

Rashi (Rabbi Shlomo ben Itahak) was a French Jew (1040-1105) whose very first comment on the very first verse in Bereshit (Genesis). “He quotes the Midrash Tankhuma to explain why God began the Bible with the account of creation rather than with the Commandments. The Midrash says that this is to answer the charge that the Jews are bandits (listim) who stole the Land of Israel. Because God created and owns the earth, He can assign any portion of it to whomever He wants. As a divine gift, the Land of Israel belongs to the Jews, and this is their irrevocable title. Thus, the very structure of the Bible testifies to Jewish rights to the Land of Israel.”

“R. Isaac said The Torah should have commenced with the verse This month is for you (Exod. 12:2) since it is the first mitzvah that was commanded to Israel. [His answer demotes the entire creation narrative to a detail that legally rationalizes the later Israelite conquest of Canaan.]

Why then does it begin with Genesis…in the event nations accuse Israel of robbery since they conquered the land of the seven nations they can respond that the entire earth belongs to God, He created it and gave it to whoever He saw fit; by His will He gave it to them and by His will He took it away from them and gave it to us”  (In the Beginning There is the Question, TheTorah.com)“Genesis establishes God’s ownership of the world, the Canaanites are tenants who have not kept the terms of their lease, and therefore God, the landlord, is justified in evicting them. In fact, Rashi’s first comment demotes all of the book of Genesis, making narrative subsidiary to law.”

Here then is my teacher still nagging me… “Was fragte Rashi?” Really, is it about the greater significance of the Law? I would later study the Midrash Mekilhta d’ Rabbi Ishmael 12:6:

“There had arrived the (time for the fulfillment of the) oath that the Holy One Blessed be He had sworn to our father Abraham to redeem his children. But they had no mitzvoth to engage in, which would enable their redemption, viz. “Your breasts were firm” (an allusion to Moses and Aaron), “and your hair had sprouted” (an allusion to the elders), but you were naked and bare” (of mitzvot). And the Holy One Blessed be He gave them two mitzvoth — the blood of the Paschal lamb and the blood of circumcision to engage in for their redemption!”

Was Rashi referring to the necessity of the mitzvot for Redemption itself?

I suggest that we stop and remind ourselves that every text has a context, a world-of-the-work from within which the text was produced. Rashi was profoundly affected by the first Crusades!

Scholars argue that “Rashi’s selection of the Midrash for the first commentary on Genesis was probably meant to refute the papal claims to the Holy Land that launched the Crusade.” The context for Rashi, that on November 27, 1095, at Clermont, some 200 miles from Rashi’s town Pope Urban II called for a military expedition to recapture Jerusalem and the Holy Land from the Muslims. The First Crusade was a “penitential war”: a summons to repent through the recapture of the Holy City and the Holy Land. Hence, “Rashi’s comment on Bereshit refutes this Christian claim to the Holy Land. At a time when both Christians and Muslims rooted their claims to the Holy Land in their most venerated “prophets”–Jesus and Muhammad–Rashi offers his Jewish readers a counterclaim rooted in the very creation of the world.” (Rashi and the First Crusade: Commentary, Liturgy, Legend, Harvey Sicherman, Gilad J. Gevaryahu – Judaism, Spring 1999)

Two or three questions is never enough, maybe, from within our own context of experience there are more questions. ‘Bo’ requires that we reflect upon the 10th plague, the destruction of the first born of Egypt, Exodus 11:4-7, 12:29-30. These profound destruction of life is parallel to Exodus 1:22 when Pharaoh commands that every Israelite male infant shall be destroyed. The biblical text never explicates either trauma of infanticide, but both are truly horrific acts that forever scar the memories of both communities.

Maybe Rashi’s question that links Bo to Bereshit is meant to distract the reader from the unresolved anguish that the trauma of infanticide is linked to the redemption of Israel from Egyptian slavery? If we need only to be reminded of the necessity of the unique Mitzvot of Pesach, then we will not be distracted by our relationship with God that celebrates salvation through mass violence. Again, Rashi lives in a world in which Christians are slaughtering thousands in the name of salvation. Since, he is writing for Jews who are the innocent victims of the violence of the Crusades, better he should link Bo with Bereshit and the universals themes of the Torah.

Questions keep the conversation going, while answers close the conversation. Abraham Joshua Heschel taught that, “Learning is thinking in God’s presence, sinking into God’s Spirit.” (In This Hour: Heschel’s Writings in Nazi Germany and London Exile, JPS, 2019, pg. 17/Kindle)This is why my teacher taught me to always ask more questions and sustain my learning.

Please fill out this form to share "How is Bo Profoundly Linked to Bereshit?" via e-mail.