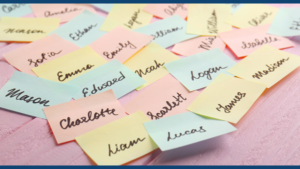 I have always been fascinated by the power both to give and to know names.  Rumpelstiltskin was, as many may recall, defeated when the princess learned his name, and so too did Odysseus suffer as he hubristically revealed his name to the cyclops.  In our tradition, names too have great power.  Right at the beginning of Genesis, God gives names to each aspect of creation as a confirmation of divine sovereignty, and Adam’s stewardship of the animal kingdom is established by the names that he gives to each of the creatures as they are created.  Later, God bestows new names on Abraham (Avram to Abraham) and Jacob (Jacob to Israel), describing their evolving ontological status both in relationship to God and to the rest of humanity.  While giving names is a biblical expression of power and authority, knowing names, especially secret or esoteric names also has a power all of its own.  God, for example, teaches Moses the tetragrammaton (the four-letter unpronounceable Divine name), revealing new and unknown (and to a great extent truly unknowable) aspects of the godhead.  Kabbalists would later seek out as yet unknown names for the Divine, as totems of great power, which could lead to esoteric knowledge and even control over creation.  One mystical sage would even suggest that all the letters of the Torah were one gigantic name for the Divine.

Names also have a power even greater perhaps than the esoteric knowledge sought by our mystics. Through our family and communal memory, names provide an immortality which can transcend the tides of time.  We are taught that when we die all our possessions and status are worthless.  The only thing that we carry with us is a “good name.”  This of course is not a reflection of the relative merit of one name over another (Tom is better than Jerry), but instead encompasses the “name” that each of us creates for ourselves through acts of righteousness and love.  Yet, just as a good name survives as a model for posterity, metaphorically “even to the heavenly court”, so too an “evil name” is to be wiped from human memory.  The ultimate Jewish curse, yimakh shmo, speaks of an obliteration from memory of an evil person and his or her deeds.  Thus, on Purim, through our noise making we obliterate the name and memory of evil Haman, remembering only Mordechai the righteous.  So too are we commanded to wipe out the memory of Amalek, the quintessential biblical expression of evil.  Even to this day, when his spiritual descendants’ names are mentioned, it is common to add yimakh shmo.

“Shemot” (the traditional title for Exodus) is literally “names.” This title was not selected intentionally to thematically reflect the book, but instead originates from an ancient naming convention, which derived book titles from the first significant word (the actual first word ayleh (these) is not utilized).  Yet, fortuitously it is profoundly meaningful.  Exodus is replete with the names of people who were truly the instruments of our redemption.  (Interestingly only the title Pharaoh, rather than the name of our ancient enemy is preserved. His name has been obliterated.)  Here we find names that are expected, like Moses, Aaron and Miriam.  Their deeds fill the Torah and our memories.  Yet here too, we find less expected names of figures that appear for a moment, act significantly, and then vanish from view.  Names like Shifrah and Puah, midwives to the Hebrew women, stand out in the text, memorializing actions (or refusal to act) so pivotal in ensuring Jewish survival.  Sadly, another name, that of Pharaoh’s daughter, so important in the survival of Moses, is not remembered.  Indeed, this was only remedied centuries afterwards as the Midrashic rabbis dubbed her Batya, the daughter of God.  The memory of all these names, early or late, reflect “his” story and “her” story and taken together are “our” story.

While we often take our names for granted, as we have seen our tradition ascribes to them the potential of great importance.  Indeed, our names are even seen as one aspect of the partnership with God and our parents as they together bring us into existence.  Biblically our names can be a revelation of our essence, indicating potential aspects of our personality and deeds (Jacob the heel, and Abraham the father of nations).  For the rabbis our names are even the keys to our souls (in Hebrew the middle letter of neshama (soul) are shin and mem, spelling out shem, Hebrew for ‘name”).   Our naming is also the beginning of our personal Jewish story, and as we live, we write our own book exemplified through the potential expressed in our name.  The midrash teaches that when each of us comes before the Divine throne in judgement, the most important question we will be asked is, “What is your name?”  God will not expect us to be Moses, Miriam, Shifrah or Puah, but rather, God will ask, “have we lived up to our own names?”  Have we been the best Stevens, Sarahs, Michals and Davids that we can be?

Please fill out this form to share "The Power of Names | Parashat Shemot" via e-mail.