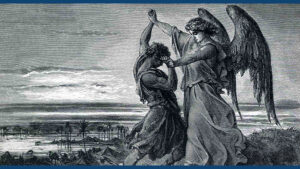 One of my most beloved teachers would offer, “Is the Bible the religious text of Western civilization because it is a great book, or is it a great book because it is the religious text of Western civilization?” Self-evidently, rabbis insist on the former conviction, and the regular submissions for “Torah From Around the World” are meant to provide strong supporting evidence.

Indeed, if we had only one fragment of the vast literature of our tradition that passes down to us from antiquity, this week’s Torah portion includes several strong candidates for the capacity to convey the heart of Jewish conviction to the world and in us.

Specifically, I shall refer to the well-known wrestling match out of which Jacob emerges with a new name, his and our name – Israel.

To unpack just some of its insights, ones hidden in plain sight, is to uncover a universe of Jewish values and ideals.

Consider the Hebrew is unequivocal that Jacob was left alone, and a man wrestled with him. Was the encounter, as the Prophet Hosea suggests (Hosea 12:4), with an angel, or a person, his conscience? All are viable options, and the text gets even more complex and vital as it reaches a climax with Jacob receiving a new name, our patronymic, with the declaration (citing the JPS translation) “Your name shall no longer be Jacob, but Israel, for you have striven with beings divine and human and have prevailed.”

That English may obscure some especially radical ideas. For the Hebrew for “beings divine” is in fact nothing less than one of the names for God. Additionally, you “have prevailed” may similarly be a little off, as well suggesting an element of hubris, for the Hebrew recalls a modern Hebrew “street phrase” (yachol lihiyot), which means it is possible as in you are capable, competent; it’s what you do, both with God and with persons, which is your skill, capacity, duty, your role.

The matter becomes even more curious as Jacob emerges from the encounter limping, which, even as it may be description of a physical condition, also must be a metaphor for the wounds life inflicts on him, on all. As he leaves that place, he names the location Peniel because – and now a direct translation of the Hebrew – “I have seen God [not as so often translated, a divine being] face to face and my life was preserved.” The reference or challenge, of course, to a well-known conviction that no one can behold God in full connection and survive the encounter.

Question: did he wrestle with God or a man? And the deep answer is yes. As supporting evidence, I refer us to the next chapter as Jacob meets and, perhaps, reconciles with his brother Esau. The text informs us that Jacob responds to Esau’s embrace with a radical insight or formula (Genesis 33:10).  “… [F]or to see your face is like seeing the face of God, and you have received me favorably.”

In brief, our tradition teaches that when we truly encounter, meet and connect with the other, with all others, even our adversaries, we are as close as humans may approach to seeing, embracing and being part of a divine encounter. Put simply, I recall the battles that were so often drawn along the lines between secular humanism as a devilish alternative to biblical conviction and any serious consideration, let alone connection to God.

The text seems to argue that secular humanism is an oxymoron or, more positively stated, there is no such thing. Rather our encounters with each other are always potential moments to meet the sacred; every meeting may be filled with blessing. Simply put, how we deal with each other is holy work, or, as I like to call it, sacred humanism. What we do with and to each other, we do to God. Our actions bring a sacred dimension into the world, or, as we push away or discount the other, even an adversary, we are diminishing holiness, turning away from a moment to arrive at Peniel – a place, a moment where we just might meet the face of God.

Please fill out this form to share "When Wrestling is More than Entertainment | Parashat Vayishlach" via e-mail.