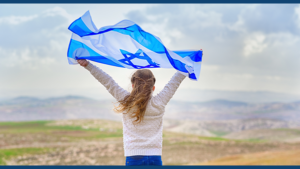 Theodore Herzl, the founder of Zionism, famously wrote, “If you will it, it is no dream.”

The beginning of every great project is a dream. The idea of a Jewish State in the land of Israel had been a dream for almost 2000 years since the destruction of the Second Temple by the Romans and the exile from Jerusalem. A very long time to be holding on to a dream and to bring it to fruition!

Over the Sukkot holiday, my family camped in a site in the communal town of Abirim. The site was run by the Hefer Farm. We pitched our tent close by the goats and even joined the Hefer couple in milking the goats one morning – on the wall was a picture of them perhaps 30 years ago in white peasant dress celebrating their wedding on the farm. From the farm, we hiked to the Ziv Stream – flowing with water even at the end of the hot, dry summer in which no rains fall. We climbed up to a place called the Temple Cave (Ma’arat HaMikdash), thought to be an ancient site of worship complete with a 2000-year-old engraving of a man walking on the rock face. I sat at the mouth of the cave at the top of a steep precipice looking out at the vast greenery and cliffs around. Here I am, I thought, living the dream.  Could Herzl have envisioned me having this moment?

In parashat VaYetze, our ancestor Jacob leaves home for the first time, running from the wrath of his brother Esau after having tricked their father Isaac into offering him the blessing of the first born. He arrives by nightfall to a place not too far from our hike. There, he lays down to sleep and he has a dream as it is written (Genesis 28:12):  “And he dreamed and here was a ladder firmly in the ground and its top reached the sky and here were angels/messengers of G-d going up and down it.”

G-d then explains to him from within this dream (28:13-16): I am YHWH the G-d of Abraham your ancestor and the G-d of Isaac. The land which you lay upon I will give it to you and your seed. And your seed will be like the dust of the earth, and you will burst out west and east a north and south and all the families of the earth will be blessed by you and by your seed. And here I am with you and I will protect you in everywhere that you will and I will return you to this earth, I will not leave you until I will do as I have said to you.” Whereas Jacob’s reality is fraught with danger and the pain of deception and separation, his dream for the future is full of blessing and hope.

He believes in his dream and, when he awakes he promises (28:20-21): “If G-d will be with me and will protect me on this way that I am going and will give me bread to eat and clothes to wear, And I will return peacefully to my father’s house and YHWH will be my G-d.”

And then we see Jacob’s dream become reality. He marries Leah and Rachel  He works for his uncle Laban fourteen years and makes both of them rich. He establishes a family with many sons and a daughter.

Is a dream simply a foretelling of the future? Or is a dream the kernel of an idea whose purpose is to serve as a motivating vision for people achieved only by blood, sweat and tears?

A midrash tells of a woman who came to Rabbi Eliezer and told him of her dream in which she saw the loft of the upper story of her house split open. The rabbi interpreted the dream that she would give birth to a son. And, indeed, this is what happened. She had the same dream, Rabbi Eliezer gave her the same interpretation, and she had a second son. A third time the identical dream came to her and she went to Rabbi Eliezer but she could not find him, so she told her dream to his disciples. “You will bury your husband,” they said. Soon afterward her husband died. When Rabbi Eliezer heard her wailing he asked what had happened and he was told the story. He said to his disciples, “you have killed a man…” (Bereishit Rabbi 89)

According to this story, the dream interpretation is as if not more powerful than the dream itself.

Dreams can serve as a source of direction in our lives providing a bigger picture which keeps us steady and tells us the meaning of our lives. G-d spoke to the prophets oftentimes in a dream. And we hear the voices that give us inspiration to do great things, to do impossible things – to make the desert bloom, to send men and women to the moon, to continue to be engaged in the seemingly endless struggle for righteousness and loving-kindness in the world.

We also know that having a dream is by itself not enough. Dreams are realized through hard work. The process includes obstacles and setbacks, or people who don’t share or even contradict our dreams.

We sing the words of Psalm 126 on Shabbat and holidays to begin Birkat HaMazon, the grace after meals: “When YHWH brought back those that returned to Zion, we were like unto them that dream.” The dream is the vision. The dream is what gives us hope.    We have tremendous dreams for Israeli society – a just, compassionate pluralistic Jewish and democratic nation.  We dream daily of peace and tranquility.

As we learn from our ancestor Jacob, struggle is a part of life (hence his later acquired name – Yisrael).  Our mandate, in Israel and around the world, is, in the midst of our struggles, to sustain the optimism and forward-thinking of the dream.

Please fill out this form to share "Dreaming in the State of Israel | Parashat Vayetze" via e-mail.