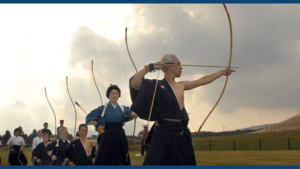 Sporting endevours are often more than just a metaphor for religion but are powerful in their own right.  For Americans and especially the Japanese, baseball has a power all its own, where the stadiums are cathedrals and the games religious rites.  Likewise, Sumo, with its sonorous chants, pageantry, and striving wrestlers is a spiritual activity.  Yet, there is a special power and excitement when athletics and religion, not an uncommon Japanese occurrence, come together in an explicit fashion.  Indeed, every traditional Japanese sport (and here I might include ikebana (flower arrangement) or even the traditional tea ceremony) is highly ritualized, with every action replete with meaning.

Kyudo, the way of the bow, is one of the most spiritual of Japanese sports.  The dojos, often located at Shinto shrines or Buddhist temples, are the locus for individual growth. Each archer aims to engage him or herself in ritualized meditation through Kyudo.  Hitting the target is only secondary to achieving a calmness of spirit as the archer strives so that each preparatory action achieves its own perfection.  The archer aims to loose him/herself in each of the actions that proceed shooting of the bow, to get to a place where there are no thoughts and no illusions.

In the Jewish tradition chet is the word for sin.  Interestingly it is actually derived from an archery term meaning “missing the mark.”  Unlike other traditions this concept of sin lacks finality.  Missing the mark can be a temporary occurrence, so long as we take the necessary steps to hit the target — make the right decisions – on our next attempt.  Just like for the master of kyodo, each of the steps is equally as important as the final action.  If each is done with the greatest degree of sincerity and care then the final shot cannot miss.

Parshat Nitzavim introduces this possibility, introducing the quintessential Jewish imagery of repentance.  God set a path for us a Sinai, before all of use, prince and peasant.  Yet we have free will, we can choose the path we wish to walk.  We take aim with our arrow and shot as we can.  We are warned of the punishments that we face if we turn from God, and the example that will be made. Yet we are also taught that Divine love and forgiveness is far greater than Divine anger. If we turn back to God, then God will turn back to us in love and forgiveness.   We are constantly given the choice, the blessing and the curse, and God is forever hoping that we choose the blessing.

This of course is the theme of the High Holiday season.  During this time we are asked to look at our lives, and make the changes necessary to refocus for the future, to hit the target through our decisions and actions.  Like Kyodo, teshuvah, the way of repentance, requires that care be taken in each of its steps.  First, we are asked to consider our lives, and think of the things that we have gotten right and those which we have gotten wrong.  Then, we must apologize to those we have injured, and attempt to repair the wrongs that we have done.  It is also important to forgive those who have injured us who sincerely repent.  Finally, we must make a true effort not to make the same mistakes in the future.  If each of these steps is done with sincerity then our teshuvah cannot fail.  But if any step is done without honesty then there has been no true repentance.  We will miss the target.  Teshuvah is not a process that can be left for just a few days.  It is too late if we only start on Yom Kippur or even Rosh Hashanah.  Like archery, only time and practice lead to perfection.   It is not too late to begin; take the opportunity to begin a process of tikkun, repair, so that in the future our arrows will hit their mark.

Please fill out this form to share "Nitzavim, Hitting the Mark | Parashat Nitzavim" via e-mail.